Review and Pic by Jim Trotman

Well, I haven’t had their beer. I understand it is quite good and has loyal adherents, our buddy Harold for one.   But I think I smell a vanity project. For one, calling the contents of the bottle 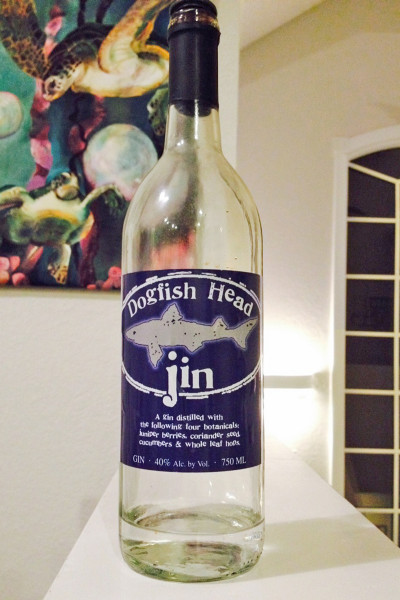 gin would be a serious stretch, to call it “jin” is just being a little too cute.

Now, this isn’t so far off that it won’t find fans. I just have a wee problem with a gin that would list whole leaf hops as a botanical.   Why they tossed cucumbers into the mix I have no idea. I’d never know if it wasn’t right there on the warning…. I mean label. Interesting note is the bottle shown on their website looks different. Maybe they changed things up somewhere in the batches. Why am I going on about the label? Because I think Russ wants me to crank out as least 250 words for these things. He’s never said that, I just imaging him saying it. That happens. Hang around with him enough and you’ll imagine he telling you stuff like that too.

Oddly, the one photo I made of the shows it mostly empty. Russ has some explaining to do. How did that much of it get drunk? I’m thinking this was its second appearance at a gathering.

There was a note of juniper, but not enough in my case to liven up this spirit.

But you may like it. After all, somebody out there claims to be a Jerry Lewis fan. So I’ve heard. I haven’t met one, but I’m sure they are out there.

Dogfish Head is made by the same people that brew Dogfish Head Ale’s in Rehoboth, Delaware – a beach town almost as nice as Nags Head.

Unfortunately their gin was not as big a a hit with me as their ales.

It was very smooth, with no burn, but it did have a hoppiness to it, which made me wonder if they share zany of the same equipment in their processes.

It was a little smoky and was not unpleasant, but I don’t think I’d drink it regularly, if at all.

I agree with my buddies—this is not really a gin that I would classify as such.

So, if you are a gin drinker, even one with a broader definition of what constitutes “gin” and possessed of a sense of adventure that has escaped these three old, traditional farts, this batch still doesn’t make the grade in our book.

Yet, I am going to disagree somewhat with my ‘partners in pursuit of gout and other alcohol related issues.”

Dogfish is first and foremost a highly recommended craft brewer that, at least on the East Coast, has broken out of the “boutique” category and become more of a commercial product–perhaps where Sam Adams was 15 years ago.

The brewery self-identifies itself as producing “off-centered ales for off-centered people.”

Why would we expect the gin, including the spelling, to be anything different?

Dogfish also follows another trend, which Jim noted peripherally in his review, something we have discerned in other craft distilleries.

The trend of which I speak is the tendency of a brewer, vintner, or distiller to expand into other genres of alcoholic beverages that center on their primary product.

Hence, we see grape growing producers, such as those in France, producing gins and vodka where grapes are the neutral sprit and after distillation…somehow retain their ‘notes’ in the allegedly neutral spirit and affect the other traditional botanicals.

White Tiger’s Dark Corner Distillery emphasizes moonshine and bourbon and there was no escaping the fact that the wheat/corn mash base found its way into the gin.

TOPO, which makes one of the smoothest moonshine whiskey’s on the planet (I am sipping it now as I type this review) uses a wheat based neutral spirit that all three of us could detect in their gin–which resulted in mixed reviews from our little band of tasters.

All three of us would embrace juniper and coriander–traditional botanicals in the London Dry vein.

While Jim is not a fan of cucumber and I usually would reject such a radical introduction of a botanical, I actually love Hendrick’s Gin, where somehow the cucumber and juniper coexist in harmony.

And, in Colorado on a farm where pears, apples ands other citrus fruits abound, we found Cap Rock (http://gingents.com/uncategorized/cap-rock-colorado-organic-gin/) and a gin that tasted like apple cider.

Viva la difference. But please…just because you add some juniper into a spirit, let’s not call it gin (or ‘jin’). It may be a perfectly delectable spirit, but don’t call it gin.

In the case of Dogfish, the “whole-leaf hops” predominate, so call it an IPA spirit..too much alcohol content and the presence of distillation removes it, legally and otherwise from the
“beer” or “ale” category, but at the end of the day, Dogfish is an IPA in another dimension. That single botanical killed it for us.

And, for what it is worth, this “jin” is limited production, meaning Dogfish produces it irregularly and one is most likely to find it, if at all, while visiting the brewery/distillery in Delaware.

I’ll take you behind the scenes for a second. It’s alright. I have cleared it with security. Okay, it works is like this: Much of the time, we all sit down for a formal tasting and usually we are all 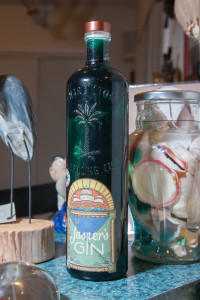 sampling a gin completely new to us.

Other times, Russ, known to the neighborhood as “that Gin Collector dude,” will show up at a friendly neighborhood get together and will, when the host isn’t looking, add one of his newly acquired gins to the bar. “Lo, what fresh Hell is this?” we all say and toss a bumper down. If the majority of the crowd doesn’t wince too much, and if there is any left, he’ll schedule an official tasting about a week later.

There was plenty of Jasper’s left for tasting after a Halloween shin-dig. Maybe it was more like a wing-ding. Not sure. Anyway, I’m thinking he just didn’t notice the wincing this time, and treated (subjugated) we gents to another go at Jasper’s a couple of weeks later.

Frankly, it has taken me that long to come to terms with Jasper’s.

On the one hand, I simply adore South Carolina. My son went to college there, we have vacationed there and have had a blast in Charleston.

It’s the only place I have been where, while enjoying a drink at a bar, a man walked in with an 18th century cannon ball that his gardeners had discovered in his front yard, a few blocks away. It was most likely British, shot into town during our late 1700s fisticuffs.

It’s where my mother, a life-long nature lover, found her favorite tree, the Angel Oak on John’s Island. As a history nut, it’s where the first (major) shots of the awful Civil War were fired.

And the bottle! A work of art! The raised lettering, the detailed Palmetto fronds, the motto, “Hand Crafted With Honor” on the label, complete with the fortress, the Liberty Crescent, and right there in the corners, little blue juniper berries! One Hell of a set up for a gin guy, right?

Hell, even on their website, they dare you to find fault with it.

I quote, “THIS IS NO GIN LIKE YOU’VE HAD BEFORE. THROW OUT WHAT YOU KNOW A TYPICAL LONDON DRY TO TASTE LIKE. GONE? GOOD. NOW THROW IN FARM HARVESTED GRAINS, HAND-PICKED BOTANICALS AND, VOILA, YOU HAVE YOUR NEW FAVORITE GIN.”
In all caps, no less.

In the end, the taste did not live up to any of the class or swagger of the packaging.

Basically they are saying, throw out what you know gin is supposed to taste like.

Even if I could, I’m not liking this as a substitute. Sadly, Jasper’s ends up being just another grain heavy, juniper light, waltz through a too-humid, breezeless hot house of concentrated flora.

I tried it three ways. First, like usual, a thimbleful straight from the bottle, then on the rocks and lastly with tonic. Each step was less an improvement over the previous.

I was all ready to go for this one. It slipped away.

I discovered this gin on a road trip to Tampa, Florida and back in 2015.

I had planned a stop over in Charleston on the way down, met up with some friends and on the way out of town, planned at stop at Charleston Distillery Company on King Street.

The vodka, King Charles, I could tell from the minuscule sample was quite good…smooth as silk and just a hint of wheat.

The itsy bitsy gin sample was inconclusive, so I did what any dedicated alcohol fan would do…I purchased a bottle of the vodka and the gin.

Jim was correct that I introduced (i.e. snuck) it into a neighborhood Halloween fire pit party.

He is incorrect on the other detail. I did indeed try a Jasper’s and tonic that fright filled night and thought it tasted pretty crappy, and I saw a ton of wincing from the entire ‘hood.

But this site is dedicated to serious (in our own minds) gin reviews and dammit, I was going to force the guys to another try, this time with no distractions.

I mean, as the unofficial leader and supplier of gin to the group, it is their job to follow me to hell and back, isn’t it?

So we gathered ’round the gin and this time, it was a group wince.

I mean, this concoction has absolutely no right to call itself “gin.”

It was like sucking down a floral bouquet, and a bad one at that.

I can’t even recommend it, as I have other non-gin gins, as a reasonable alcoholic beverage.

It tastes bad neat, on the rocks, and mixed with just about anything.

Sorry guys…because of the awesome vodka (seriously, buy the King Charles Vodka) I wanted to like this; doubly so as a southern dude who wants gin to gain a foothold in the land of bourbon.

But my advice….avoid Jasper’s like a friend request on Facebook from a “hot” Russian girl you’ve never met…

Jaspers Gin is another small batch gin that hails form one state south in the Plametto State of South Carolina.

Sadly, for me, it has a very grainy taste, almost like a whisky – perhaps it’s Palmetto fronds, because it has almost a cardboard taste to me.

Maybe it;’ a nuttiness of pecans, which are mentioned on the bottle as in anise, and there is a clear licorice smell and taste.

Overall, it smelled like the bottom inside lining of your grandmother’s purse, if you have ever been looking for an old pack of Lifesavers in such a place.

At least for me, all of that blended together was not a hit.  It’s just not what I’m looking for in a gin…maybe in a flavored vodka, but not gin.

The bottle is nice though.