Additional coolness factor: Kosher/Passover versions available in both No. 209 gin and vodka!

My studious research reveals an interesting tale regarding the genesis of No. 209. In 1870 William Scheffler purchased a patent for California rights for a new still design, headed west and became a winemaker for Krug in St. Helena in the Napa Valley. He built a distillery attached to the winemaking buildings at Edge Hill which he had purchased two years prior. When he applied for a distillery license, the government granted him distillery license 209. So he named this new facility, with all the imagination of a 19th century bureaucrat, “Registered Distillery No. 209.” 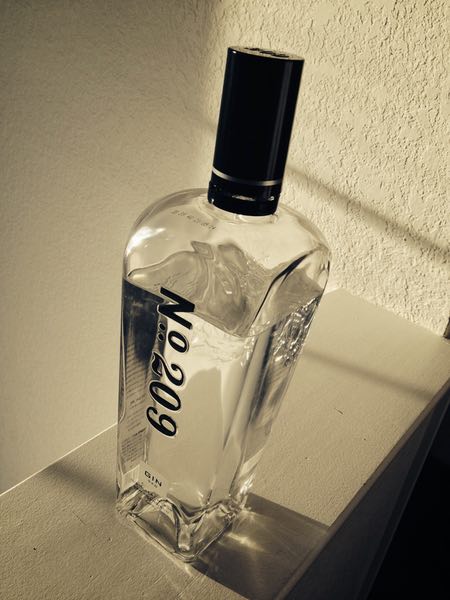 Photo by Jim Trotman. PHOTO NOTE: Man, iPhone cameras are getting better and better. Lighting was the natural light bouncing all around Russ’s stairwell. The bottle is handsome in a Spartan way, with a bold, 19th Century font proclaiming simply, “No. 209.”

Enter winemaker Leslie Rudd, of Standard Beverage Corporation, Dean & DeLuca, PRESS Restaurant, and the Rudd Oakville Estate winery. In 1999 he “became the new steward” of Edge Hill and while looking over the property he stumbled across a hay barn with the words “Registered Distillery No. 209 over the doors. A light bulb came on and Rudd set out to restore the property and to rejuvenate No. 209 gin.

The restoration was completed and the effort won awards yet as it turned out, the size and location were less than ideal for Rudd’s aspirations and so he built a new distillery on the industrial Pier 50, on San Francisco’s Eastern waterside, south of the famous Embarcadero.

The man of many talents who actually crafted the recipe and currently maintains the production of No. 209 gin is Arne Hillesland, their “Ginerator.”

So, hanging out basically over the water is this 1000 gallon Forsythe copper pot still with a swan like neck. Inside is a four times distilled neutral corn-based spirit. After careful blending and milling of the ingredients; juniper berries, cardamom, cassia, bergamot, coriander and several other things, Hillesland macerates the botanicals overnight in the still. This it is fired up once again and in 11 hours a single, final distillation pass occurs and bingo, out comes No. 209.

We need to admit here that we had at least one (and maybe another) swing at tasting No. 209 before we got serious about it. But those were noisy, distracting party affairs. Then one day about a week ago I was summoned to Russ’s and right there in front of a video camera, we got down to brass tacks. It’s not Russ’s fault but visually, it didn’t capture my best side, it captured my fat side. But it did make for a good set of notes for this review.

Once we finally got the cap off, thanks to my insanely strong muscles,

the sniff test brought a light alcohol base, but I didn’t get the citrus notes right off like what every other person tasting this was written on the net.

On first sip, straight from the bottle, I picked up the juniper right away, but with the sharpness smoothed out. Another reviewer said it was “slippery,” but it was too early in the evening for any surfaces to feel slippery to me. Maybe later.

On ice, the botanical blend came forward in a pleasing, if not assertive fashion. More sips revealed a peppery, lightly tingly taste that had me thinking of parsley. To me, the main secondary taste running neck and neck with juniper was that of coriander. Citrus notes were delicate to my palate. Basically this is a nice, non offensive botanical blend.

All in all I found it a quality sipping gin and probably the colder it is served, the better. A couple of drops of Vermouth couldn’t hurt it, but I think we both agreed that the tonic we added dulled the gin a bit.

I give it three cufflinks or loosened neckties or swizzle sticks

Screw it…Let’s get the final verdict out of the way—I like this gin. A lot!

As luck would have it, I was able to first sample No. 209 in it’s native town-San Francisco

My wife and I popped into a little bar on Polk Street, aptly named Tonic after a great dinner at the Lemongrass Thai restaurant a block away on the same street.

We sidled up to the bar and the distinctive No. 209 bottle was prominent on the top shelf.

I asked the barkeep about the gin with some local pride, he responded it was from San Francisco and well worth a try.

I ordered it in a gin and tonic, and then a second, and would have gone for a third had it not been for the bitter cold walk back to the hotel as the temperature was dropping by the second.

Most people I know who dislike gin do so for one of two reasons; a) it tastes like a pine tree, and b) if they drank too much and became ill, the pine tree smell keeps them away from the stuff in the same way overindulgence in tequila spawns similar bad memories.

While following the London Dry style of predominant juniper, No, 209 keeps juniper out front, but the berry’s presence is what it should be— 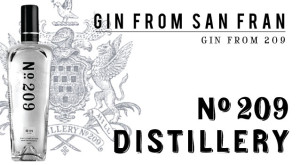 which to me means front and center but not overwhelming.

Those of you following GinGents will remember your humble writers prefer the juniper-predominant London Dry style, but even we draw the line at gins that evoke the scent of those tree-shaped air fresheners in otherwise odiferous taxi cabs.

On the other hand, thus far, we have been more skeptical of the new American-style gins that are either so mild as to resemble vodka where lack of juniper is concerned, or move juniper too far to the background and serve up flowery gins that, while different, are not our cup of tea, or, more appropriately, our shot of gin.

But there is no rhyme or reason to the order in which these reviews occur. So bear with us as we bounce to and fro.

We acquire a gin, usually on our travels or through friends, we add it to the ever-growing gin cellar, and when we write a review, we grab one at random and drink it up. That’s the sum total of our methodology.

So, you’ll notice, just like most gin drinkers, our views of previously sampled gins can change as we are exposed to new brands.

For me, No. 209 makes a fine gin and tonic, and while I agree with Jim that it’s true value comes through over the rocks or in martini form, I highly recommend this gin for anyone who dislikes the spirit based on a bad juniper experience.

You’ll get the juniper that is the hallmark of all gins, but also some citrus-like zest and a few spices to boot.

In fact, one of our neighbors, a woman who hated gin as a rule, tried No. 209 and kept with the drink for much of the night.

On the rocks and as a martini, this is a gin that has led me even closer to adding “gin sans tonic” to my repertoire of drinks I like.

No. 209 is smooth and lacks the alcohol burn present in so many mass produced gins.

I suspect this gin is truly handcrafted and in the distilling process, some of the harshness we taste in “major” brands has been removed by careful distilling with attention to detail.

On the rocks, the juniper is more prominent than in a tonic, but it is still restrained—in a good way.

But in this form the other botanicals shine—especially the orange and lemon elements (zest-like hints, not heavy-handed orange or lemon-flavored vodka flavor), as well as the cardamom.

No. 209 is also one of the few new American gins breaking out into wider distribution.

We’ve found it in Virginia as well as in larger cities in North Carolina, mostly in liquor stores, but sometimes in a bar or two.

I’ve also seen it at numerous online liquor stores, so if you live in a state that allows delivery of spirits, No. 209 should be easy to obtain.

Larger chains such as BevMo! and Total Wine and Spirits also seem to carry it as a staple.