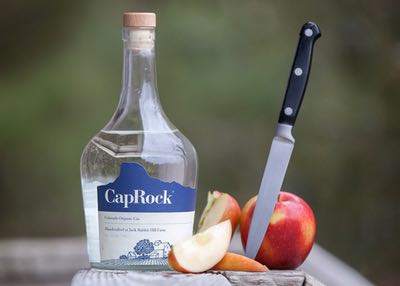 Our local market actually carries Braeburn apples. I’m partial to the Fuji myself. My wife likes the Granny Smiths. But those are real Braeburn apples in the pic. Because, accuracy. We don’t fool around here.

Okay, we got that out of the way. Readers understand at this point where we generally are coming from. Let’s move on.

Russ kind of sprang this one on me during a road trip. Indeed, for a couple of hours it was the only gin in the room.

Gave it a look, lovely. Gave it a sip… what tha?

So I made up a Traveling Salesman Martini, which is gin on the rocks in the plastic cup from your hotel room.

The taste was bright, fresh and candy-like and fruity. Russ, already aware of it’s provenance said, “Well, what do you think?”

“Think about what grows in Washington state.”

I suppressed to urge to say that Jolly Rancher Watermelon Candy doesn’t grow in Washington state because I wasn’t sure if it actually did or not.

Bingo. Now, the site says the base distillate is made from both organic wheat grain and from organic Jonathon and Braeburn apples. The flavorings come from a dozen fresh and dried botanicals.
If I were to list the tastes I encountered, truthfully it would be hard to break them down because the stuff is really round and smooth and nothing really sticks out to me other than that crisp unctuous apple-ness, but not like a cider though.

I guess it just really reminded me of more like a subtle, better crafted version of some homemade applejack I sampled at a friend’s hunting lodge. That isn’t a bad thing.

It is, in a word, delicious. It is also fairly narrow cast in as much as there will be limits to what can be done with it, but it is certainly a substantial drink on it’s own.

Not a lot more I can say here but to conclude this is a clean, crisp, well-toned elixir, without much juniper flavor at all, but is lovely to drink nonetheless.

Two and a half olives… just don’t put an olive in this one.

I have to admit, I cheated on this one.

I acquired it and took it on a long road trip to Chapel Hill, NC, where Jim and I visited Top of the Hill restaurant and the TOPO distillery, a special feature coming soon to GinGents.

We stayed at the funky, Euro-cool Aloft Hotel in the UNC Tarheel capital, and while Jim was freshening up, I popped the bottle open, found some hotel ice, and poured it into my plastic hotel room cup.

Then I had another. Jim takes a while to make himself purty.

I also tasted it straight, then on the rocks, then as a gin and tonic. Then one more. 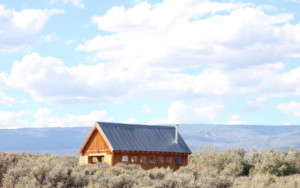 Photo and description from Peak Spirits web site. The still shed, world headquarters for Peak Spirits® Farm Distillery, is where we craft grapes, apples, peaches, and pears into CapRock® Gin, Vodka and Brandies. Our little Holstein still was made in Germany’s orchard country, near Switzerland, so it’s very happy in it’s home on Jack Rabbit Hill Farm, surrounded by the breath-taking orchards and vineyards of the North Fork Valley!

By the time Jim emerged, I knew we’d be taking a cab for our to and from Friday night foray into Chapel Hill.

Neat and on the rocks–wow! What a blast of fruit. On the nose and the palate.

And yep, apple hit me front and center.

And then another botanical that is becoming very common in American gins appeared–lavender.By now I am almost able to detect lavender right off the bat as so many American gin distillers use it.

The website for Cap Rock say roses are in there also and I have no doubt that is the case. I just couldn’t detect those notes.

And, a whisper of juniper was present.

This is a gin that, in my opinion, does not qualify as a true gin when served up as a martini or on the rocks.

The juniper is far too subdued and the apples and flowery notes– too strong.

Some American style gins may taste great (this does) but that doesn’t mean they qualify  as a  true gin martini or on the rocks drink.

You might think rum and Dr. Pepper makes for a tasty drink, or even rum and RC Cola, but that doesn’t make it a real rum and Coke.

With these American-style gins, the same sort of confusion exists. It tastes awesome, but is it a gin martini or something else?

When you transition to a gin and tonic, things change and do so for the better.

My gin and tonics almost always include a squeezed wedge or lime or lime juice from a bottle.

I had tonic but no lime at the hotel so I waited until I returned home to make a real gin and tonic, with fresh lime wedge, and a double shot of Cap Rock in a Tom Collins glass, which also implies extra tonic as well as extra gin.

Which is OK with me!

In the G&T form, the juniper comes forward a bit more, just enough for it to score as a gin.

But the combination of the ice, lime, and tonic tones down the apple and lavender into something that is delicious and refreshing.

If I wanted a martini and didn’t care if it followed a gin, vodka, or something completely different, I’d still order it.

Just be prepared for Cap Rock, in that scenario, to defy your expectations.

In any event, if you come across it in a bar or a liquor store…buy it, try it, and open your mind–but only so far. Because the jury here is still out on whether or not it’s a gin.