Average US Retail Price: Expensive as all get out, especially for just 375 measly ML

“Monkey 47 is the greatest gin I have ever tasted. It’s as good as it gets. If ever a gin deserves 100 points it’s this.”

These are the words of Robert M. Parker Jr, one of the world’s leading wine critics, famous for his 100-point scale and his newsletter, The Wine Advocate. 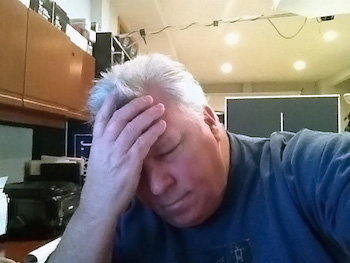 The quote is used on a full page ad for Monkey 47 and having tasted it, I think Mr. Parker needs to stick to wine.

Folks, what we have here may have a winner for the strangest tasting gin of all time.

It is absurdly complex, it is nose-bleed expensive and I found it horrid. 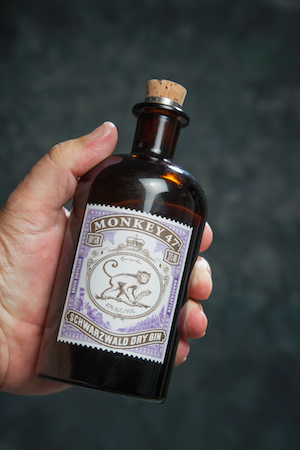 This stuff gave me a severe Jägermeister face. Not that it tasted exactly like it, but I tell you this, it comes close. There is this herbal assault that grabs your mouth, vapors of a whole greenhouse so strong you think it would knock the taste buds out of your mouth. That would be merciful. Instead, it lingers. I just took a sip now just to make sure and now I have to drive to the 7-11 to get an Icee to wash this all away.

And we thought Uncle Val’s was rough.

It is fun, once one samples for themselves and draws their own conclusions, to look around at what others have to say about a particular gin. Many review sites are not honest.

You can tell by how they talk all around the taste and never really tell you their honest opinion. They do this because they do not want to suffer advertiser backlash. Perhaps they get their samples for free and don’t want to upset the apple cart.

But I tell you this for real, Russ and I (okay, mostly Russ) buy the gins we drink with our (his) own money. If it is a skunk, we will tell you it is a skunk.

This Monkey is a skunk. To me. Personally, anyway.

On the plus side, the container is rather handsome, a medicinal looking brown bottle, short and squat with an amusing, highly detailed label with scrolls, an English crown, the Black Forest of Germany, and a not particularly cute monkey. In fact, on closer inspection, the poor little fella is clutching what appears to be a branch that is no longer attached to anything. 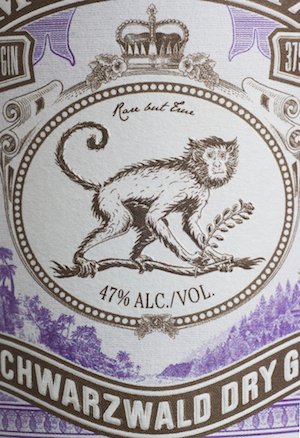 He has no visible means of support. [Label pic]

I have this recurring pain in my right elbow from repetitive motion that comes from retouching with a graphics tablet. Seeing as how Monkey 47 resembled an ointment of sorts I rubbed a little on the painful area. It actually made it feel better! I’m not fooling.

Monkey 47 is marketed to the hipster niche, and I’m sure they will hit their mark. If not, they can maybe try pharmaceuticals

But it just does not taste good.

Now I’m sure, just as some people like escargot and some would never think of eating snails, someone out there probably likes this. Thinking this might be the case, at a recent dinner party we invited guests to taste it. Two people out of eight, said they found no fault with it. So there you go.

But, and this is just one 375 ML bottle, and after seven tastings by five people, it still remains half full.

I rest my case.

Other than it’s medicinal value, the saving grace of this whole experience is that at least I didn’t buy it.

And if Mr. Robert M. Parker Jr. is reading this, I hope you got paid well, son.

You can pay $10 to gain admission into a zoo, stand in front of the monkey exhibit, and have them fling poo at you.

Or, you can plunk down $50-$70, depending upon where you buy gin and drink something that tastes like monkey poo.

If you choose the latter, you probably took the bait from all the cool advertisements in wine and spirits magazines extolling the virtues of Monkey 47, a German gin previously unavailable in the United States.

The fact that it is now available here is perhaps one of the few arguments this libertarian can come up with against the concept of free trade.

And for that $50-$70 you are rewarded not only with a drink that doesn’t even come close to tasting like gin, you only get half a bottle (375 ml), or as Jim and I like to say, “Hey, there’s only half a bottle left, we’re out of gin. Crack another bottle open, please!”

From my perspective, Monkey 47 (named so because it has 47 botanicals in it, although we’re not sure about the monkey part of the name) tasted, as Jim said, like medicine. Or bad licorice. Or perhaps they share a factory with Jaegermeister and the stuff accidentally got mixed together–kind of like peanut butter and chocolate in Reese’s cups, but with the opposite tasting result–monkey poo instead of a perfect marriage.

It is simply impossible to describe the taste of this stuff. The only truth in the advertising they publish is Monkey 47 is indeed complex.

But so is the process of decomposition and I don’t bottle that and peddle it as something worth buying. 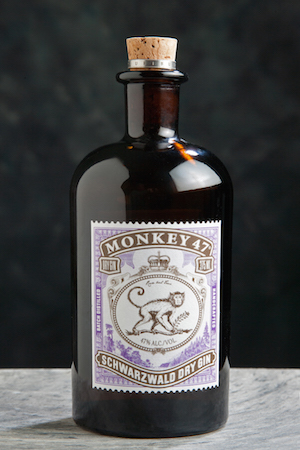 Oh yeah, as for juniper. It ain’t there.

Their web site claims a “pure scent of juniper.”

Nothing, and I mean nothing, could save this gin.

Except to chase it with an old Southern USA standby-RC Cola.

Straight out the bottle–medicine. On the rocks-medicine. As a gin and tonic, medicine and tonic.

And of course, no one but Robert Parker, the guy who apparently can taste the difference between  wine rated 97 and one rated 96 could possibly appreciate 47 botanical tastes vying for attention on your palate.

To be fair, we passed this around to other gin drinkers.

Not a single one was willing to call it a gin and among the four other tasters, only two liked the taste.

But they thought of it as more of a liqueur type concoction than the subject of this blog–gin.

Wish it been two cents worth–because that’s our rating….

PS: Last time I checked with Jim, to whom I gladly bequeathed the remainder after our taste testing, the bottle was still not empty.

That’s never happened in our tastings before. Even Uncle Val’s was eventually consumed!