Plymouth–It’s not your father’s car, but it might be his gin!

Price: $28-$35. Widely available in most states, high-end bars and online

Plymouth. It’s been around since 1793 and for good reason.

There was a time when Plymouth and Boodles were right up there on the shelves of good bars and liquor stores with Tanqueray and Bombay.

But Plymouth was left behind when huge conglomerates purchased Tanqueray and Bombay, literally saturating the market with their main gins and all their new variations.

But that fact doesn’t deter me from keeping Bombay on my shelf.

Until this month, I could only buy it up in Virginia, a 90-minute drive from the Outer Banks.

But now, the North Carolina ABC store in Nags Head is carrying it again. For how long, who knows? It’s been an on again, off again thing here for two decades.

Part of why I love Plymouth is its history.

There was a time when England boasted three styles of gin—London, Liverpool and Plymouth.

London was not just juniper forward, many brands were and are juniper heavy.

Liverpool style disappeared long ago so I never got to try it.

But Plymouth, a huge port home to the Royal Navy and British merchant ships boasted several distilleries and being so close to port, Plymouth style became the gin of choice for seafaring men—and subsequently spread throughout the British Empire.

There is no defined standard for Plymouth-style, but most histories of gin note the spirits produced in that town had more detectible citrus notes than their London cousins.

Now, only one Plymouth style gin remains and, of course, it is eponymously branded “Plymouth.”

So why do I love it so much?

Pour some in a shot glass and waft it under your nose.

And there’s some lemony thing going on, as well as a hint of spice.

Now throw that shot glass back.

OK—maybe the last one was a stretch.

You’ll love the subdued alcohol burn while the juniper dances around with some citrus notes.

And then it comes to you.

You can bring this gin to any gunfight you want and it will keep right on being smooth, but with enough backbone in flavor to survive even an onslaught of WalMart brand tonic water.

Shake it up in a martini and it slides right down.

Pour it over some ice—even those cubes that have been in the icemaker for a month and reek of plastic and it retains it’s gin like character without an overwhelming essence of Pine Sol.

Personally, I think Plymouth, like Boodles, puts Tanqueray and even Bombay to shame. Neither of them are this slick.

You will also detect notes of cardamom and coriander.

Cardamom is most likely what drives Plymouth’s citrusy, even lemony notes.

Cardamom is a common traditional gin botanical and when used correctly, it also serves to reduce the alcohol burn and take juniper down a notch without relegating it to the background.

And the coriander adds to the citrus sensation and perhaps provides a pinch of sweetness.

Juniper is still the star, but it doesn’t dominate like LeBron James.

In a gin and tonic, Plymouth continues to shine and this is why I like it so much.

It will hold its own against tonic water, rising above the quinine and even a fresh lime squirt, still retaining it’s flavor profile, including those citrus notes and the delightful juniper presence.

Unlike other “gins” we’ve reviewed, I’m not drinking “flowers and tonic” or “apple and tonic” or a gin so lacking in character (Bristol Bay) that I’m thinking “Wow, I’ve got a freaking glass of tonic and tonic.”

And who the hell am I to argue with 222 years of history and the Royal Navy?

Give it a shot. Or a double shot.

Ahoy! It is safe to say that, like the British Empire at one time, the sun never sets on a bottle of Plymouth Gin.

Plymouth, as with many a sailor’s DNA, was spread all across the globe by wind and sail.

From their own website: “Thanks to the British Royal Navy taking it on ships all over the world, it was to become the world’s largest volume brand of gin with 1000 cases a week going to New York alone by the 1900’s.” Thanks indeed.

It may have much more competition these days but this is still a widely available gin. 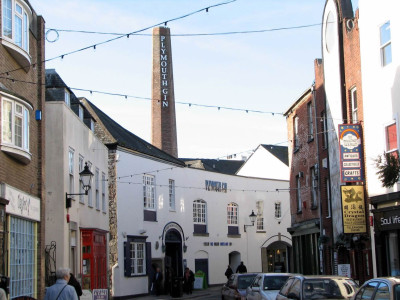 Hey, I can even get a bottle here in the gin dessert of Dare County, North Carolina!

The even better news is that it is good, really good. It is at once bold and smooth with a complex citrus sensation that rides on the back of warm juniper notes. The mouth-feel is rich but not cloying, and I found the finish crisp and clean. Exactly what I look for in gin.

Naturally one is tempted to compare Plymouth, which is its own style, to the venerable London Dry kings such as Boodles, Beefeater and the like.

In my mind, Plymouth is less dry than it’s London neighbors but I don’t notice a great deal of difference as to amount of juniper in the equation. It could be the mix of the other botanicals that make the juniper a sharper part of the whole. The London Dry gins share many characteristics of this taste profile, but I discern a sharper edge on the Plymouth.

Am I making sense?

I am a guy who drinks gin usually on the rocks with nothing added except a LOT of ice and sometimes a splash of tonic…splash being defined as less than a tablespoon.

That drives me toward the really smooth gins, Boodles being my favorite since it can be commonly found (except in Dare County, NC).

It has no perceptible “burn” on the lips or tongue and none of the pine/juniper scent that comes to the front in so many gins, especially the cheaper brands of the London Dry variety.

Having said that, my everyday gin has been Tanqueray, and I like a little juniper presence and even enjoy a taste of alcohol, especially in a G &T.

Plymouth is the best of both worlds. 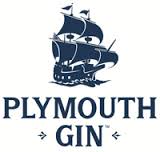 It is reasonably priced in most places and pleasant consumed in almost any drink.

Over ice it is very smooth, and while I ordinarily add some lime to my drinks, with Plymouth it really wasn’t necessary, since it has some hint of citrus in its scent and taste.

I’ve read that in part that may be due to the cardamom, the world’s 3rd most expensive spice, which can have a lemon or lime hint.  It is used in some medicines as an anti-irritant for the digestive tract as well as for adding a subtle zing.  Whatever it is, it earns its keep in Plymouth Gin.

The Plymouth folks have used the right touch with their recipe of ingredients and have succeeded in creating a wholly enjoyable gin that is cooling and smooth over the lips and past the tongue.