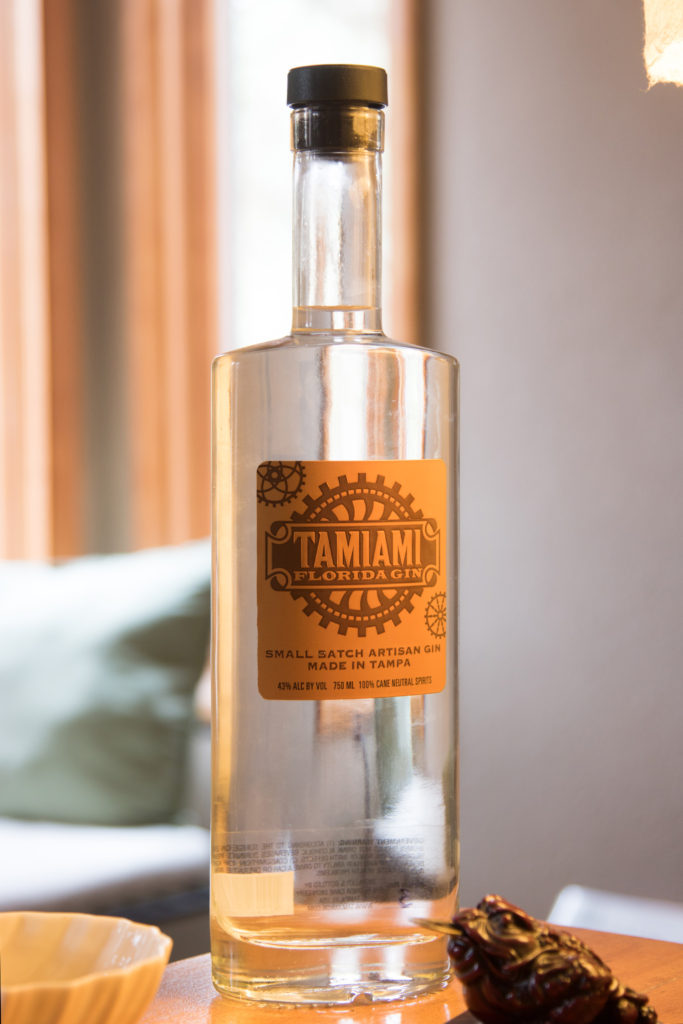 Style: ‘Above and between Old Tom, London Dry and New World”- Flordia Cane website description. Who are we to argue?

Holy Smokes. Tasting this small batch gin from Florida was a treat and interesting. Juniper was in there, but more subdued than say, a Booth’s, a crisp bit of cucumber made itself known, but as far as major flavors go, I must say it was smoke.

Or was that an impression?

Or was someone burning something between Russ’s house and mine and I just caught a whiff of that?

The company stresses the base of a pure sugar cane spirit for the base. It should since the maker is the Florida CANE Distillery of Ybor City.

The folks at FCD are quite adamant (and proud) that this gin has only 4 botanicals to supply its flavor profile and not a word about any of them being smoked. Those ingredients, besides the cane neutral spirits, are: Organic Coriander, Cucumber, Juniper and Tangerine (yes, Florida tangerine.)

Like other distilleries who dabble in the gin world, their main product lines are several flavored vodkas. These folks also produce moonshine and whiskey. But I would not know anything about how those taste.

The gin was quite pleasant. My one qualm being the smokiness I detected was a little bit of a distraction, a distraction that I got over as the resulting empty bottle can attest.

The price of $24.99 for a 750 ml bottle places it right beside our gold standard, Boodles in affordability. My figuring is that Tamiami Gin will appeal to folks familiar with that region.

Fun fact: The name Tamiami is not a reference to any long gone American Indian tribe, but a contraction of the phrase, “Tampa to Miami.” I suppose that is better than the other way around.

Maimpa just doesn’t have that swing.

I was lucky enough to visit the distillery with my wife while on vacation, so we were able to sample everything–from their flavored vodka’s, which includes the aptly named Fire Ant, and a host of flavored moonshines.

Even with small samples, our palates were burned out so we purchased a mess of their products from the liquor store and brought them back to North Carolina, where one would have better odds of being hit by space junk than finding any Florida gins in our state-owned liquor stores.

I didn’t notice the smoke as much as Jim.

What I did discover was a fine balance between the juniper-forward style we love and citrus, which I’m beginning to appreciate as a background note.

Happily, it didn’t taste like a fruit-flavored vodka and even with coriander, it avoided any floral sensations.

I often describe wines that are light, reds and white, as “quaffable” versus the heavy, tannin-laden reds one pairs with steak, or the buttery, oaky chardonnays that pair with creamy sauces over pasta, seafood and the like,

Likewise, some gins are meant for sipping, especially in a martini, where you’re basically drinking gin straight up, others taste like jet fuel, and then there are those gins that are happy on the rocks without accompaniment, shaken and poured, or mixed with a tonic or other elixir.

Tamiami fits in there well. Sip it in the winter, or pour it into a tall glass with your favorite tonic and hang out by the pool.

Hell, I might even mix it up on the rocks in my 36-ounce Yeti and hang out on the deck all day!

As I noted, the juniper holds its own, with just enough presence to comprise three of the five basketball players on the court.

My next sensation was the presence citrus, which makes sense since we have Florida tangerine and coriander in the mix, but it was definitely in the background, where it belongs. And the citrus didn’t express itself as tangerine as much as it did a more bracing zip to the gin. It balances the juniper.

Exiting, the cucumber was there, but nothing as overwhelming as Hendrick’s, one of the few non-juniper forward gins I can drink.

It’s incredibly refreshing and I really want to get my hands on some more since I love the Tampa area and can pretend I’m enjoying it on a 70-degree winter day in Florida while it’s blowing a gale in 30-degree weather here on the Outer Banks.

I give this gin four Churchill’s.