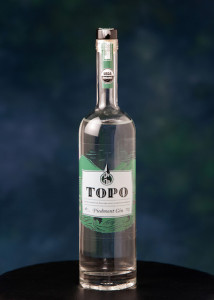 Style: American but with their own twist

I’ve got say, I spent more time with this gin than any other we’ve tested so far.

And proud to do it, given TOPO Piedmont Gin is a Tar Heel state production!

It all started when I scored some minis at a North Carolina ABC store in New Bern, NC. (Insert our recurring theme here: Dare County, our home domain, has the worst liquor stores in terms of selection considering in the 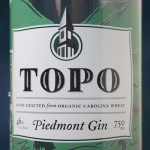 I brought some home and Jim and I did a few trial runs.

We looked at each during the shot glass phase–juniper was on the nose, but what was that middling flavor?

But there is was. Or was it?

Later I bought a bottle in another town and we tried it at a party. With no prompting, half said it had a whiskey-like hint, the other half didn’t notice it.

All concerned thought it was delightful, just very different from traditional gin.

As it turned out, Jim and I took a trip to Chapel Hill and we scheduled a visit at the TOPO distillery where we met the head distiller-Esteban McMahon.

And of course, we asked him if there was a whiskey base present. After all, our very first gin ever tested for GinGents was White Tiger from South Carolina, where they freely advertised they started with a moonshine base.

Esteban looked at us like we were crazy and he went through the botanicals and they were the usual suspects; cardamon, coriander seed, anise, a little cinnamon, cucumber and citrus (lemon and lime zest among others.)

So I tasted and tasted when I returned home and then I replayed the interview with Esteban.

And then it hit me.

TOPO’s gin, like all their liquors are not only truly organic when it comes to ingredients, about 99% of what’s in the bottle is sourced from North Carolina. 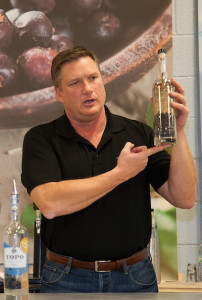 And for a base, they use soft winter wheat from Scotland Neck, NC.

The same wheat that makes delicious Southern biscuits in our part of the world when ground into flour.

And there is was. Good whiskey (at least for me) comes from wheat, barley and anything else except corn!

So let’s get back to TOPO.

Like many American-style gins, they’ve dialed back the juniper–but not enough to remove it from the nose or the palate.

And yep, there is a citrus note, especially in a martini, along with those notes of cucumber (but not as strong as Hendrick’s), cardamon and coriander.

And a lot of other stuff going on–both on the nose and in the taste. This is one complex gin.

And it is so beautifully distilled that one other flavor lingers–the soft touch of the winter wheat.

TOPO does not overpower its base spirit and I personally associate a great wheat base with a great whiskey.

Thus, the wheat across as whiskey to me.

The more I sampled, the more I liked TOPO.

It makes a great gin and tonic because all of the botanicals are strong enough to stand up to the tonic water. It was so smooth I skipped the lime squeeze and merely enjoyed. Quite a feat for a gin sporting a 46% ABV level.

In a martini it works just as well. All of those interesting botanicals, the hint of wheat, and the absolute smoothness of this gin make it a pleasure to drink.

If you like London Dry and a strong juniper flavor, TOPO may not be your cup of tea, or your glass of gin.

But for my taste, this is one American style gin that came up with the proper formula–keep enough juniper to make this old gin drinker happy, but dial up some other botanicals to keep it interesting–and by all means, avoid the floral notes that too many American gins have adopted.

Instead, dial up the citrus and other traditional botanicals and let have a chance to strut their stuff.

TOPO–I like it. If you’re going to stray from the English tradition, this is the way to do it!

So on to Topo, which my friends prepped me by explaining is a small batch, organic, award-winning, world-class elixir made right here in NC. I was given the honor of opening the very attractive bottle, and raising it to my nose, expecting the familiar aroma that only Gins have — a blend of juniper and other botanicals. What I got instead was a puzzle. What is that, I asked quizzically? They shrugged and asked me to go further. So I poured a shot straight up, sniffed and sipped it (not a technique I usually use). I was still puzzled, and a bit put off. They pushed me to say what I thought, to which my response was that I wasn’t sure what it was, but it reminded me of something I didn’t like…not an answer they expected, I sensed. 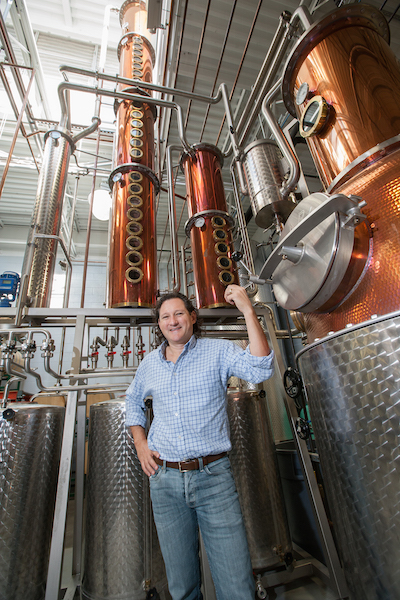 So what is it? I’m stumped. It clearly is Gin of a sorts, because after being put over rocks, it was drinkable, and the juniper is there, but hidden. And to my nose and tastebuds it is hidden by a clear earthy, peat aroma and taste that tastes like scotch or maybe a rye or Irish whisky. It is clearly grain based, but also earthy, and to me not choice I’d make.

Upon hearing that Topo also makes other distilled spirits, I asked if it was possible they shared the same still, with the taste of one passing on to another. That’s the only thing I could imagine might be the answer.

You might like it if you like Scotch, but I wouldn’t give it a thumbs up. I’m fairly sure I know what Gin is, and Topo isn’t one I’d pick as an exemplar.

Thumbs up to the guys in Chapel Hill for bringing a distillery to the Tar Heel State! I wish you the best!