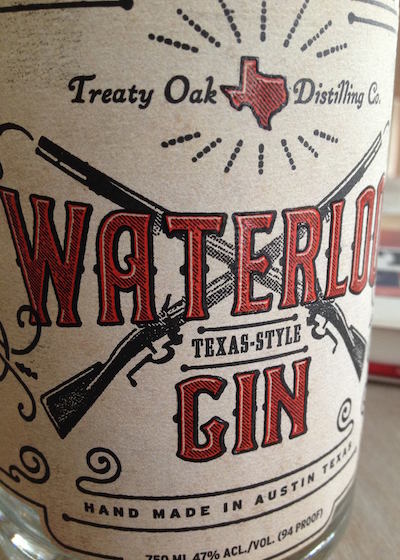 Photo by Jim Trotman. The Ferguson rifle was among the first breech loaded weapons to see active service. They were an experiment of sorts and were used by a elite British unit during the American War of Independence. Conventional muskets of the time involved loading at the muzzle, with a good soldier being able to fire 3 times per minute. With the Ferguson, one turn of the trigger guard opened the breech at the rear of the barrel. A round bullet would be dropped in followed with a measured charge of gunpowder. One twist in the other direction closed the breech and on charging the flash pan, the weapon was ready to fire. Though crazy expensive to manufacture, a soldier armed with a Ferguson could double the muzzle loaded musket rate of fire. Not only that, but it could fire sixty shots before the action had to be cleaned. Though a breakthrough in engineering in its day, the Ferg floundered as it was just too expensive to produce and the wooden stock had a tendency to break in combat. Hand crafted, bold and ahead of its time… no wonder they picked it! And you thought all we knew was gins.

It’s not just about Napoleon’s great defeat at the hands of a guy who may or may not have a beef dish named after him.

Nor are we speaking of one of the worst songs ever to grace the airwaves; the annoying tune performed by the Swedish group ABBA.

Instead we are talking about a gin made in Austin, Texas.

Texas is not a locale one would even remotely link with the word “gin.”

But thank your Lone Stars the folks at Treaty Oak Distilling conjured up a gin recipe that while not traditional is in all respects a damn good gin.

As our readers are by now aware, we tried the gin straight from a shot glass.

And this time there was a trio of tasters in attendance, with the addition of neighbor and gin aficionado, Harold Gracey.

I passed the shot glass under my nose and immediately sensed this was not a harsh gin. The alcohol was muted.

And then came the taste test.

My response was “Wow!” as the video shows. And I didn’t even grimace.

Gin is not a “shot drink”, but man was Waterloo smooth going down. I knew I was in for a treat.

Juniper was certainly there and with enough of a note to place Waterloo in the London Dry category that the distillers wanted to emulate.

But something was softening the juniper as I sipped it from the shot glass and my suspicions were those notes would be uncovered as we moved to a more traditional tastings.

With my rocks glass at the ready and my anticipation rising I poured about a shot’s worth into the container.

The ice immediately brought to the front more notes—something nutty (turned out to be pecans), a little citrus (grapefruit) and another something that complimented the juniper while the same time, softening its effect.

Turns out there were two botanicals at work here—lavender and rosemary.

We’ve spoken of lavender with other gins we’ve reviewed.

Some distillers give this botanical too much of a heavy hand, turning a perfectly good into something that tastes as I imagine a flower bouquet might taste if I took a big bite out of the blossoms.

Waterloo, to put it simply, is nice and inviting on the nose. Wine lovers will recognize this technique, where lesser-known grapes serve the dual function of softening tannins and imparting a pleasant nose.

Don’t forget smell has a profound impact on how we perceive taste.

But it turns out the rosemary (and I admit we had to look it up on the internet to determine what it was) is key here.

Many gins utilize rosemary, but so far, none have mastered the botanical as successfully as Waterloo.

Like juniper, rosemary has a “pine” taste and smell, but many also detect a hint of tea, and it is that hint that allows the rosemary to balance the juniper while the lavender softens the entire mix.

The pecan adds a bit of complexity, perhaps even the ingredient that ultimately defines this gin.

To complete the tasting I used a gin and tonic with a squirt of lime juice.

This time I chose a mass-produced tonic-Seagram’s, and the result was a super refreshing beverage where the gin stood up to the tonic and revealed all its notes-juniper, rosemary, lavender, grapefruit and even that nutty pecan.

I can see myself drinking this (and perhaps, having it sneak up at me) poolside on any hot Southern summer day and scoffing at my beer-drinking or mint-julep tasting companions.

As far as I am concerned this gin, while quite different from my favorite, Boodles, is truly top shelf and if I had the means to acquire it regularly, would be in my top ten gin rotations.

I rate it as many queenie olives as one can hold in the palm of their hand.

Okay, I dawdled long enough on this. Time to put aside work that actually pays so I can get down to brass tacks here on this gin tasting. You want to know what I think about this Waterloo Gin? I love it.
Here’s a gin that one can easily sip, straight out of the bottle into the shot glass, no chill needed. I’m serious. You can do it repeatedly, at that.

After a quick sniff that rendered warmth and “juniper” goodness, I took a sip. Wow. Not like fireworks, but like a smooth, warm “greeting” is the best way I can describe it. Mouth-feel might be the word I’m looking for here.

Normally, a sip of gin plays around on your tongue and you feel a need to draw a breath as the alcohol impacts the taste buds. Not here. It’s more like a welcoming envelopment with the accents giving up their notes in close order, and all the shoulders are smooth. It comes on smooth but with a mellow strength. This is one of the best gins I’ve tasted!

Being a Tex-patriate, it doesn’t take a lot to tempt this old cowpoke to want to hop the next flight into DFW. Well, maybe not in July. But stumbling across this gem from the town in which I invested so much of my parent’s money as a University of Texas student, had me falling deeply into a homesick mode for my home state.

But what was it in this elixir to bring forth such a profound response?

What could they put in there to make a longtime London Dry style guy go topsy-turvy?

I might be going out on a limb here, but I’m betting most Waterloo Gin will be consumed by Texans or at least in or near the great state of Texas. I’m betting it will be huge.

Waterloo Gin has that factor; that intangible quality found in the food and drink of Texas that somehow reinforces itself. You actually taste Texas! Let me explain it this way…

Sip a Shiner in Luckenbach and you flash on a memory of the brisket at Louie Mueller Barbecue in Taylor. Bite into a Puffed Picadillo Taco at Dallas’s El Fenix and summon a cooling memory of Blue Bell ice cream in Brenham. I took that sip of Waterloo Gin, and I was transported straight to a Brats Plate at Scholz Garten in Austin. It is a cosmic connection; all taste and place. It goes around and around. 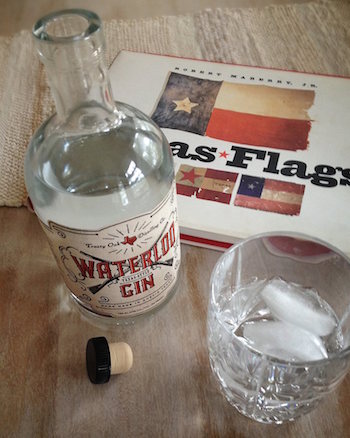 Photo by Jim Trotman:Tasting Waterloo Gin put me in the mind of pouring over a favorite book in my collection, Texas Flags, by Robert Maberry, Jr. It seemed a suitable background. In the close-up, you can note the distinctive firearms chosen for the label.

For this tasting we have a friend of mine to thank. Whit Martin-Whitaker, from my hometown of Garland, follows this page and tipped Russ off to this gin. It is Whit’s favorite. By the way, when you are in Central Texas you can listen to Whit spin classical music tracks on KMFA 89.9 FM. And you can listen in on the internets too at http://www.kmfa.org

Holy cattle guard! I’ve been a-rambling like the Rio Grande.

Back to the gin.

As Russ points out, Waterloo Gin has nothing to do with Napoleon’s defeat (or Wellington’s win, if you look on the bright side, like me.) Instead, Waterloo was the name chosen for the site on the Colorado River where the seventh and final Republic of Texas capital would be built. Not long after, the site and resulting town was renamed in honor of the Father of Texas, Stephen F. Austin and Waterloo went the way of the dodo.

Treaty Oak Distillery takes its name from a 500 year-old live oak in Austin and was one of a grove of trees known as the Council Oaks. This area under the trees was a meeting place for the local Comanche and Tonkawa tribes. Stephen F. Austin met with the Indians there and negotiated a boundary treaty. Austin now of course is the beverage and culinary crossroads of the country, with big time music habit.

This gin seems the successful result of crafting a London Dry style gin then injecting it with Texas character.

Beyond the juniper, the classic botanicals but are present yet buttressed with the addition of pecans and grapefruit, all Texas grown. What the pecans lend is not a stand out taste of nuts. To my mind they do impart a slight nuttiness but bring more of a balancing agent to the combinations of licorice root, ginger root and rosemary and lavender.

Indeed, it may be the pecans that add so much of that extraordinary mouth-feel. I’m convinced it was the pecans.
This is not a meek, mild wallflower gin or another vodka posing as a gin. This is a big, bold and yes, brave gin.
On the web you can find an interesting graphic supporting Waterloo Gin. It is a highly stylized “battle” design based on the iconic Lone Star Flag with the motto, “Don’t just drink it because it’s from Texas, drink it because it’s not from England.”

Couldn’t say it better myself.

Let me start by introducing myself: I’m a rare person in that my drink of choice is Gin which tastes like Gin, and maybe even burns a little. I generally drink it on the rocks, unadulterated except by a small slice of lime…no vermouth, no tonic, no nothing except for lots of ice and that small slice of lime.

My go-to gin is generally Tanqueray, if that gives you a notion of what I prefer. Having said that, Waterloo was a nice surprise. I was surprised, given its “gentleness” on the tongue and lips even straight up, that it is 94 proof, at the high end for most smooth tasting gins. It was also a little different from most, in that it had almost no detectable pine/juniper scent or taste, but did have a nuttiness or woodiness that we surmised was probably from the pecans which are listed on the bottle as one of the botanicals it includes.

Over ice, it glides over the lips and tongue with almost no alcohol sensation, and with a good tonic which Russ provided it was like a soft drink.

My guess is this will prove to be a great gin especially for that summer gin and tonic drinker that really doesn’t like the traditional gin, taste but likes the look feel and taste of a tall G&T when it is HOT in the summer.

For some it will be a dangerous gin, at 47% alcohol, sneaking up on them and leading to embarrassing summer pool party experiences.