Report and Photos by Jim Trotman

When my eyes first connected with this bottle, I totally missed the “Oriental” under the name. When you see the letters, “OPIHR” you are going to be occupied trying to figure out how to pronounce it. I did, however, spot the lettering, in an electric blue,“London Dry Gin,” and it made me smile.

“Oh thank you, Jesus, we are back in the realm of realness! “

Somehow, I managed to totally not register the funky psychedelic elephants>

Got her upstairs and pulled the cork. “Ah!” Reassurance we were onto something good.

It does smell great. Would it be a sin to dab a little as aftershave? There it was, the scent of a solid London Dry…. But hey, what is that? Something hinting toward the exotic? Something a little smoky?

Poured the slightly viscous gin into a shaker, tossed in some ice and gave a shake until the vessel was too cold to hold. Poured it into a tall martini glass and took it all in.

Great mouthfeel. Velvety and luxurious. A few notes of, what? Pepper? Yes! There, right with it is the toasty, sweet kiss of coriander.

About the pepper, this isn’t your frat rat buddy’s Pepper Flavored Vodka, which is most often the birthplace of very bad decisions. This is a pepper note akin the scent you get at the first grind of a pepper mill filled with Indian Tellicherry peppercorns, which turns out to be exactly what they use.

Add to that the warm embrace of cardamom and a hint of citrus.

(He glanced again at the label.)

(He rotated the bottle around.)

There on the back was a map, a simplified chart of the ages-old spice trade centering on India. Well, Duh! Now it all made sense.

One’s imaginations (set free by the clear elixir) might land a one in the bar car of the famed Oriental Express, being handed a neat Opihr, and feeling happy about it, even if the route only took you as far as Istanbul.

A little web research reveals a few insights that are fun. On ginfoundry.com, I learn quite a bit. For instance, “Opihr” refers to a port somewhere along the Spice Route. King Solomon is said to have obtained all sorts of goodies from there including, but not limited to, apes, gold and peacocks.

So there is that.

All that said, this would be a “sometimes gin” for me. It packs a lot and more than two in an evening would be overkill. But one must admire the skill to slide a solid London Dry over just a skooch into the spiced gin realm. 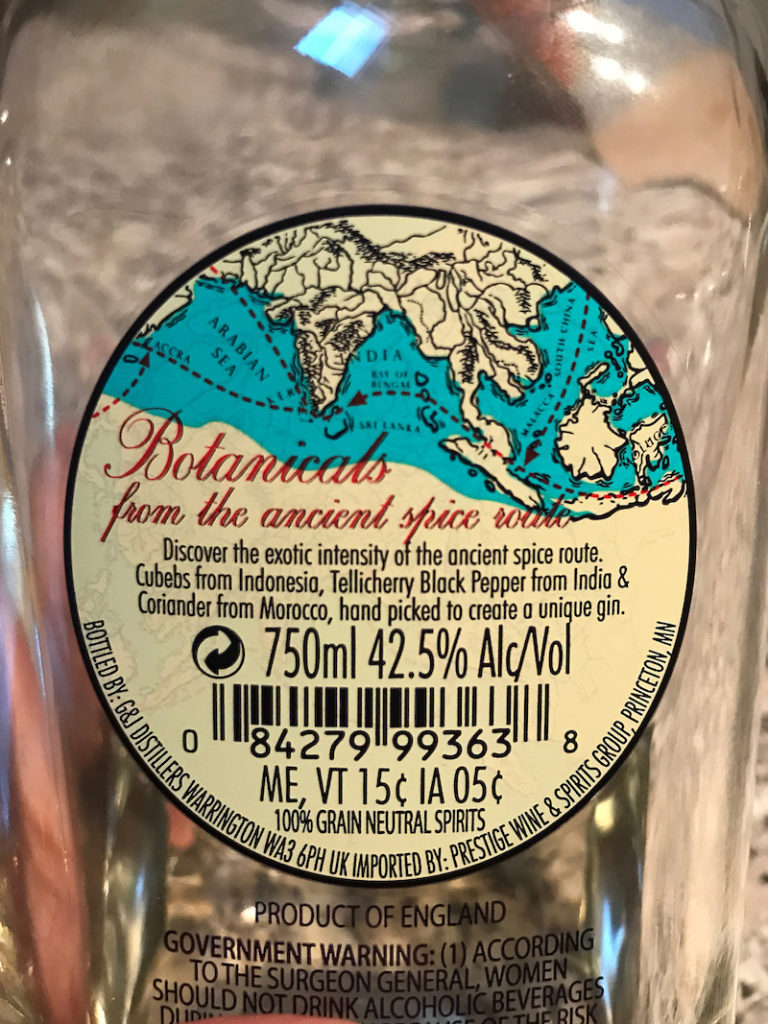 Like Jim, I was finally glad to return to a gin that at least claimed the label of “London Dry”.

I won’t repeat Jim’s recap of the spices involved and the Oriental connection the gin, he provides an excellent background.

But I will add some trivia before the tasting notes.

We’ve reviewed one other G&J Gin, Greenall’s and while it didn’t knock our socks off, we still enjoyed it and recommended it, especially for gin newbies.

I also learned from G&J’s corporate website that the company’s Master Distiller is Joanne Moore, one of the first females in the world to earn the Gin Master Distiller designation. Moore is responsible for Opihr’s creation and she oversees the distillation of Greenall’s, a gin which preceded her arrival.

My experience was exactly the same as Jim’s.

When I popped the cork and poured a shot, black pepper and juniper were the first two notes I picked up.

On the palate, served over ice, there was my beloved juniper, out front, but sharing the spotlight with fresh cracked pepper with a hint of citrus, which I suspect comes from the coriander.

Joanne Moore, one of the first females in the world to earn the Gin Master Distiller designation. Moore is responsible for Opihr’s creation and she oversees the distillation of Greenall’s, a gin which preceded her arrival. (Photo from G&J Distillers website)

I actually finished my gin on the rocks, a style I usually avoid and enjoyed it immensely.

Next in the batter’s cage was my go-to gin option, the gin & tonic.

I tried it first with Schweppes tonic, a mass-producedOpihr tonic that is a little heavy on the quinine.

Opihr stood up to the challenge and not only did the juniper rise above the tonic, the pepper and coriander were present also.

Changing to one of the tonics that are marketed as higher end, in this case, ‘Q”, the essence of Opihr was even more noticeable as the quinine plays a lesser role in this brand of tonic.

Again, I found myself drawn to the pepper–not in a hot or burning manner, but expressed more as a slightly warm sensation that came across more like a light spice note on the nose and palate, while letting the juniper and citrus shine through in a nicely balanced beverage.

One more time into the fray, this time with El Guapo bitters mixed with club soda.

Bitters such as El Guapo are a new trend, using citrus and other herbs to offset the quinine’s bitterness. In this case we brought out El Guapo’s British Colonial Style Tonic Syrup.

This is a slightly thick concoction and must be used sparingly, about a 1/4 shot for a G&T is enough to add flavor to the club soda and not overwhelm the gin.

Once again, Ophir rose to the occasion.

Jim is a martini/rocks guy, and I can see where the pepper might be a tad much over the course of a night where your gin imbibing might pass two drinks.

But my style, to blend a gin with something else, be it tonic, lime juice, bitters, and club soda, this is a great twist on the London Dry.

It gave me the London Dry, juniper-forward taste I crave, but added pepper, citrus, and a lightly spiced overall mouthfeel to differentiate it from Bombay, Boodles and a host of other standards, go-to London Dry varieties.

I’ll be buying it again for sure!

And hats off to Ms. Moore for a fine gin!