We’ve had a rough summer of 2015–our usual avocations, vacations, and then a round of illnesses conspired to keep GinGents from updating often.

We are close to being able to get the wheels back on, but we thought we’d follow up our TOPO Gin review with an article about of visit to the distillery. which also turns out some fine whiskey and vodka.

Story by Russ Lay, all photos by Jim Trotman.

Across the street was a building that used to house a newspaper. 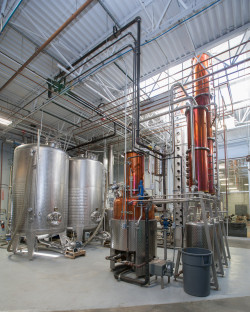 But, the GPS said we were in the right place and we all know GPS’s are never wrong.

We tried the doors—all locked

Nothing that looked like a distillery until we spied an awning over a door and read it:

We had come full circle. This journey began at Top of the Hill Restaurant & 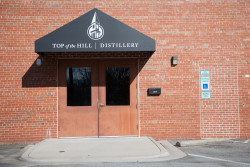 Brewery and we were now visiting their latest achievement.

Proprietor Scott Maitland and Esteban McMahan, the distiller, met us before their scheduled tour for a private tour.

McMahan spent the most time with us, walking us through the business history of the distillery and driving home the same philosophy that animates Top of the Hill restaurant and it’s brewery.

The philosophy is simple—organic ingredients, true hand crafted products, and the best equipment for the job at hand.

Whether it’s locally sourced food for the restaurant, or North Carolina hops and grains in the beer—it hasn’t always been easy for Maitland and McMahan to stay true to their belief in farm to fork, or in this case, “Grain to bottle in 100 miles.”

McMahan explained that most microbreweries in North Carolina, many of the non-Muscadine wineries and a large number of distilleries get their grains, malts, grapes and hops from out of state.

Locally made, not locally sourced.

TOPO is the only organically certified distillery in the South, or at least it was at the time of our visit.

The brewery came before the distillery and McMahan noted that ingredients and care in fermentation separates good beer from the run-of-the-mill stuff.

Their product was so good Top of the Hill was one of only six microbreweries in the world to have won three Platinum medals at the World Beer Championships.

Success their led them to open the first micro-cannery in the state so they could distribute their product.

It was in doing research on that project that led Maitland and McMahan to look at fermentation and distilling.

The canning facility was sold to another producer and the duo began to focus on keeping their microbrewery at the restaurant and adding a distillery instead.

But first they needed an organic, North Carolina product as their base —the place where all distilled spirits begin.

McMahan explained that prior to the Civil War, rye and wheat based whiskeys were the most popular varieties in the country.

After the Civil War, the South was devastated economically and agriculturally. Corn was both cheap and easy to grow and that is how corn came to be a mainstay in Southern whiskey. 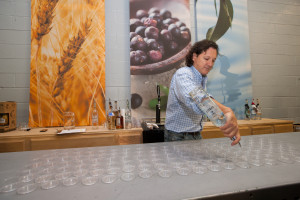 McMahan says it generally makes for a harsh tasting drink, so sugar and molasses were added to cover up the base. Over in Kentucky, they decided to add other malts and grains to the corn mash, and bourbon was born.

At TOPO all of the spirits begin with organic North Carolina soft winter wheat, sourced from a farm in Scotland Neck.

Next up was the machinery of distillation—fermentation tanks, copper pot stills and tall column stills.

By using the right ingredients from the start, the clear whiskey and TOPO vodka come right out of the stills smooth as silk.

No need for multiple distillations, a concept that Maitland mocks in his tour presentation.

“Tito’s vodka? The base spirit comes out of a mass production factory in the mid-west, a factory that also produces ethanol. How is that hand made? It then travels to their distillery by truck where they brag it is distilled five times for purity.

It’s distilled five times because the base is so harsh it takes that much time in their column still so that it doesn’t set you on fire on the way down. And even then, it’s still not as smooth as ours.”
He pours everyone in the crowd a small 1/8 ounce sip, the most allowed by the state’s ABC board and he’s right.

The vodka is smooth as silk, yet retains a hint of that soft wheat flavor.

The same thing occurs with the moonshine.

Compared to traditional corn moonshine and it’s sugary varieties, TOPO Organic Caroline Moonshine goes down smooth a silk. And again, a tiny bit of that whet lingers and adds a touch of complexity to the experience.

Last up is the gin.

The Dutch invented gin and after a few wars, the British brought it home and made their own versions.

McMahan said most of the English gin was of the “bathtub” variety and gave off foul smells and tastes.

Juniper was commonly used at that time to cover up the smell and taste of spoiling meat, so the Brits just added it to their foul smelling gin. 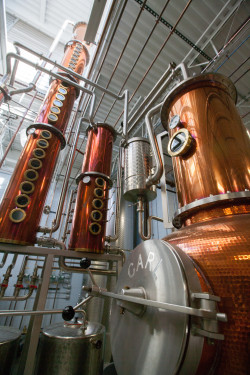 And as the British Empire spread, they took their juniper-laden gin with them and it soon became the standard flavor profile for the spirit.

To be legally called gin, most countries proscribe juniper has to be present.

How much juniper is the big debate, but TOPO, finding about 20% of people who have tried gin dislike the “piney-ness” of the drink, decided to dial it back.

After all, TOPO’s stills come Carl, a fifth-generation factory in Germany that makes what many consider the best copper and column stills in the world.

The TOPO Gin has a juniper smell, but a bunch of other stuff is in there—rosemary, coriander seed, cardamom, star anise, cinnamon, fresh lime, cucumber and lemon juice.

And with the exception of one botanical and the lime/lemon—all of the rest of the ingredients come from organic North Carolina farms.

And that 1% bothers McMahan enough that he has a local farmer experimenting with that ingredient and hopes to have that locally sourced by next year.

TOPO led the micro distilling movement in North Carolina and their insistence on state sourced product and organic growing methods gives one a sense of Tar Heel pride as well as the knowledge the money you spend is staying in the state and promoting health farming practices.

In Dare County, TOPO’s products have been hit or miss as far as availability, which is true of virtually all of the state’s distilleries. You will have more luck in Currituck and Elizabeth City finding state made liquors.

Quite a nice return on investment from a bottle of vodka, gin, or whiskey.