Before we introduce our personal selves, a few things we have in common.

Jim Trotman and Russ Lay live in a place that is very unique.

It is also a place where there are no private liquor stores. 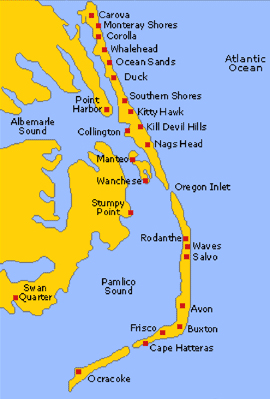 North Carolina state government owns the liquor monopoly in the state (beer and wine are sold in private stores) and each county appoints a board to run what are called ABC Stores (Alcoholic Beverage Control) in each of our 100 counties; profits are shared between the county and state government.

State-owned liquor monopolies are not unusual in the south and other parts of the U.S., but North Carolina’s stores are among the worst run in the country when it comes to product variety. And Dare County, in spite of the fact that millions of vacationers stay here each summer, is even more sparsely stocked than almost any other part of the state.

Since this blog is about gin, here are the gins available in Dare: Bombay, including Sapphire and East; Tanqueray and Tanqueray Ten, Hendricks, Booth’s, New Amsterdam, Aristocrat, and Seagrams.

So the two of us have to spend a lot of road time in other states to bring home the bottles we review.

As for the Outer Banks of North Carolina—you might recognize some of the towns, villages,and islands well known to history buffs–Kill Devil Hills, for example, is the place where the Wright Brothers first took wing in 1903.

To the north on the barrier island is the village of Corolla, located in Currituck County and often chosen as one of the Top 10 beaches in the U.S. by magazines and web sites that determine such things. North of Corolla are several subdivisions broadly referred to as “Corova”, accessible only by 4WD vehicles that travel along the beach, then cross sand dunes to the vacation developments–mostly vacation rental homes that are scattered along 20 miles of beach, right up to the Virginia border.

Continuing south is the next incorporated town –Southern Shores, a town with expensive and expansive weekly rental mansions and home to 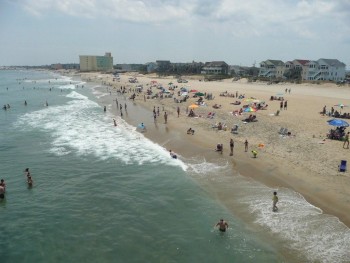 most of the county’s professional workers.

Kitty Hawk is the next incorporated town–lower priced rental homes along the ocean and small, reasonably priced subdivisions for residents.

The aforementioned Kill Devil Hills, another incorporated town is the next place you’ll hit on your southward journey. “KDH” as locals call it is home to the Wright Memorial National Park and a number of condos, hotels, and rental homes on the east side that range from the affordable to “lifestyles of the rich and famous.”

Nags Head is the final municipality along coastal Dare County–and this the town where Jim and Russ reside.

It’s major claim to fame is the tallest sand dune on the east coast of North America-Jockey’s Ridge, which rises some 80-90 feet along the western side of the island.

Jog to the west, cross two bridges and you will find yourself on Roanoke Island–home to the first English settlers in North America that most of us know as the Lost Colony–as those first settlers were gone when Sir Walter Raleigh returned a few years later (delayed by England’s war with France) and found no trace of the folks he left there in 1587.

An outdoor drama, “The Lost Colony” is held almost nightly during the summer and attempts to reconstruct the life and fate of the doomed settlers.

The fishing village of Wanchese, once a bustling center for fin and shellfish, is also on Roanoke Island.

If one continued west along one of two bridges mainland Dare County would be your next destination.

Four very sparsely villages exist on the mainland–East Lake, which borders another the Alligator River National Wildlife Refuge (and yes, we do have alligators here), Stumpy Point-a small fishing village on the Roanoke Sound, Manns Harbour, another soundside community and home to boat builders, and Mashoes, another tiny sound side village tucked far away from the tourist traffic.

Back to Nags Head, you’ll cross another span, the Bonner Bridge and land on Hatteras Island, also in Dare County.

For the first ten miles, both sides of the road are either part of the Cape Hatteras National Seashore, managed by the National Park Service on the east, or the Pea Island National Wildlife Refuge on the west–managed by the U.S. Fish and Wildlife Service.

The beaches and sound side refuge are totally undeveloped.

Next you will come to what locals call the “Tri-Villages”-Rodanthe, Waves and Salvo–three unincorporated villages chock full of vacation rental homes and beautiful beaches.

South of Salvo, another ten miles or so road returns you to undeveloped National Park territory, until one arrives in the unincorporated village of Avon–home to even more rental homes and shopping centers.

Buxton is home to the world famous Cape Hatteras Lighthouse and Cape Hatteras itself, the easternmost point on the continental U.S–also 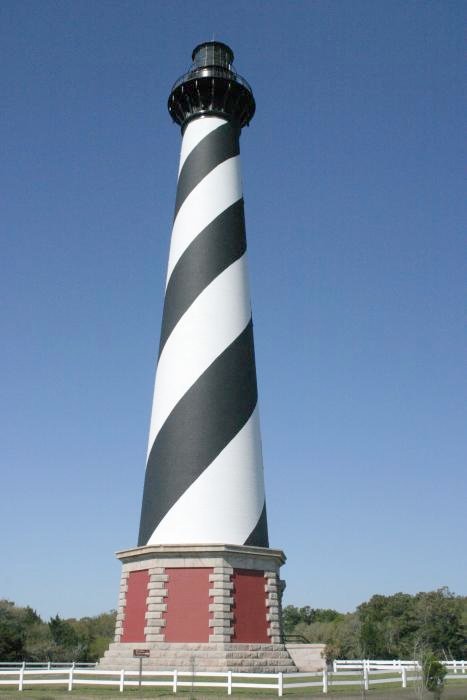 known as one of the best surfing, windsurfing and surf fishing locales in the country.

The small village of Frisco is next, then finally the village of Hatteras.

Besides tourism, all of the Hatteras Island villages are home to commercial fishermen.

At the end of developed Hatteras Island, once can take a 4WD vehicle and head east along miles of undeveloped beaches–all the way to the tip of the island.

Or, one can board a ferry and head to the southernmost point of the “Outer Banks”–Ocracoke Island–accessible only by small aircraft, private boats, or state run ferries than ply the waters between Hatteras Island and Ocracoke, or make longer, two-hour runs from two points on mainland North Carolina-Swan Quarter or Cedar Island.

Most of Ocracoke Island, to the east and west is part of the Cape Hatteras National Seashore–so once again there are undeveloped. wild beaches and sound side access.

At the very southern tip of the island is Ocracoke village, home to 800 folks and thousands of tourists—day trippers from the Hatteras ferry, or folks who stay in rental homes, hotels, or condos.

Ocracoke Island is in Hyde County and it also lays claim to a huge chunk of American history.

It was in a small harbor on the island, known as Silver Lake, where Blackbeard the Pirate, who lived and often hid on the island, was tracked down by the Royal Navy and killed.