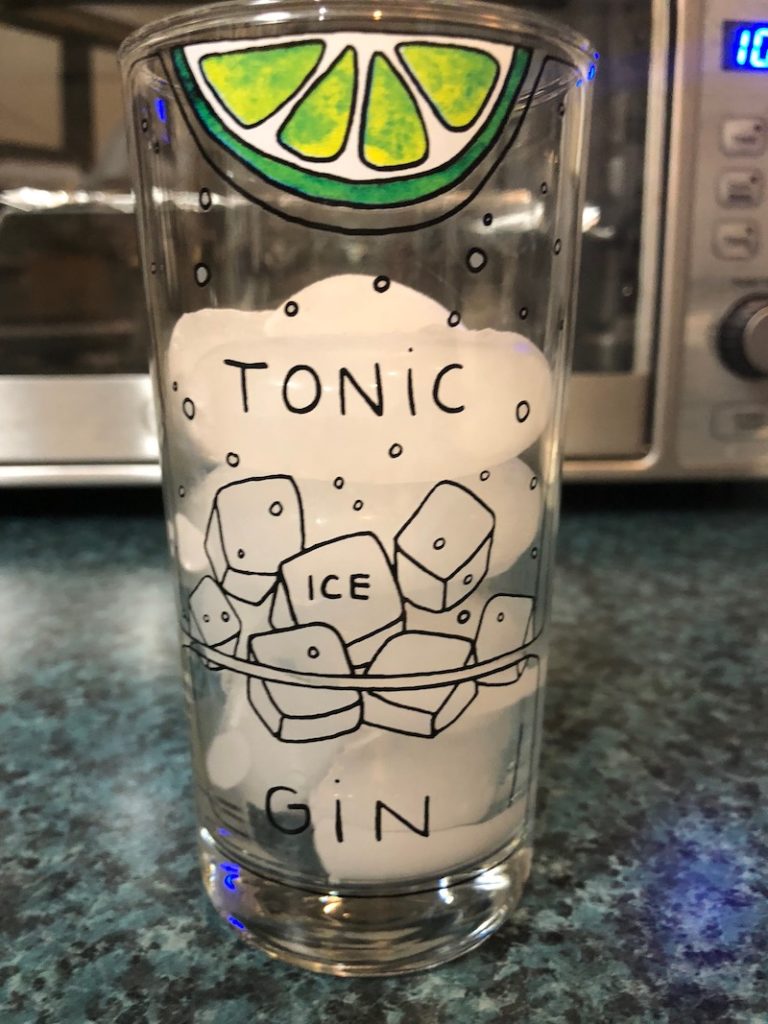 Sometimes I can be incredibly lazy and eliminating even one small step from mixing a drink is worthy of investigation on my part.

After all, every second one spends crafting and mixing a cocktail is another second you could be drinking the cocktail.

And so a few Christmases ago, my sister gifted me a pair of gin and tonic highball glasses from uncommongoods.com that took away not only one step in the mixing process, but also some guesswork if you want to mix a fairly accurate G&T.

Called ‘Diagram Glasses’, the outside of the highball glass is labeled for the correct amounts of ice, gin, tonic, and even the lime wedge.

Just fill the glass with ice to the top of the ice cubes drawn on the exterior, add your gin to the level indicated, then the tonic to its marked level.

Put a lime wedge on the rim and you’re done. No pouring gin or tonic from bottle to shot glass and then to highball glass.

I find I usually don’t even need to stir the drink as the shape of a highball glass forces mixing once you add the tonic water.

The glasses not only remove the guesswork from mixing a G&T (and yes, I realize it’s not super-difficult to make a G&T with a shot glass) but they’re relatively attractive and I find them to be conversation starters.

While women almost always ask me where I got them, a few guys also thought they were cool and did their own research to discover they also make diagram glasses for a vodka tonic, margaritas, mojitos, and even mimosas.

I’ve only seen them on the uncommongoods website, where you’ll also find a short biography of the designer, Alyson Thomas, a former Department of Homeland Security attorney!

They sell for $25 a pair and you can read all about them and their creator by clicking here!