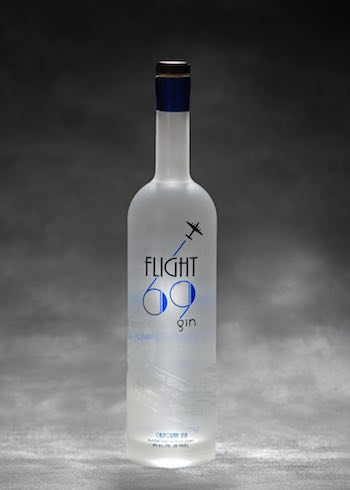 Photo by Jim Trotman: The logo is a nice design, clean and elegant and the bottle is long and lean, low drag. The glass is frosted, except for the blink and you’ll miss it detail near the bottom. (See next photo)

First things, first. I liked this. I liked it just fine. I’d have another.

Second, I shudder at calling it a gin.

If I read another sentence that includes the phrase, “perfect for those who find the pine scented aspect of gin off-putting,” I’m going to hunt that guy down and dump a bucket of cold sesame noodles on his fat little head.

People, if you don’t like gin, drink vodka or tequila or rum or bourbon or Pepsi or pineapple juice or lemonade or Rumple Minze or Jägermeister or Bénédictine or any other beverage that make me use the option key. Leave my gin alone.

Here’s the deal. The term ‘gin’ has an appeal attached to it the way vodka does not. We gin drinkers happen to like the pine-juniper taste. We wear its taste like a badge of courage. We have our own little club and our own little tent.

Drinkers, listen up. You don’t get to say you are a gin drinker if one cannot taste the juniper in the gin you’re drinking. Go to the vodka tent. You have a big old huge tent to drink under. You’ll be happier there.

Distillers, listen up. You don’t get to wear the gin moniker just because you add a tiny drop of juniper essence to a thousand gallons of vodka. That is vodka.

I’m a little edgy at the moment.
I just completed three weeks of photographing and editing a bunch of little dancers for a local school. I love the work but I need to get out to the range and shoot something.

To hear them tell it, the makers of Flight 69 Gin intended for the juniper notes to be a “gentle breeze” background note. I missed that note completely.

But what it lacks in juniper it makes up with a rounded out, creamy and complex mouthful with vanilla accents, a warm wash of lavender, and some things I just couldn’t pick out. But it tasted really nice. Hey, California grapes make everything good.
Then there is that smell. I’m walking a tightrope here but when I took my first whiff to check the nose of this gin, a bright orange tube shape appeared in my mind. The word “Testors” appeared as well.

Now, I am not saying this gin smells like airplane glue, it does not. It just has a certain quality in it’s smell that kind of shares a scent profile that I immediately related to the countless hours I spent building plastic model airplanes in the 60s and early 70s, at least until girls got my attention.

As anyone who will spend six minutes around me knows I’m an aviation buff. And I just tipped you guys off to it in that sentence above, but I was intrigued with Flight 69 from the get go.

The bottle is sleek, the label depicting a high-flying four-engine prop job, likely a DC-7 from the looks of it, heading Northeast on an extension of the ‘6’ in 69. As to why the makers chose that particular flight number, well, let’s just say attempting to form a consensus could make for an interesting conversation.

The makers write something about the revolutionary spirit of 1969 being the basis, but I think that is just to cover their butts.

Don’t go putting an olive in this stuff. Maybe a grape stuffed with cream cheese would be good. This is a fun beverage. Hard to acquire in these parts but we all do a little traveling.

I went back over our video recording of this tasting and the first word mentioned was “lovely”!

So, we have a winner!

Too bad it’s hard to classify this product as a gin. But it tastes good, so it’s a winner in some category TBD at a later date.

In a separate article following this one, we’ll go over what has become a conundrum for this new site, and recap what is going on in the industry as whole over these so-called “New Western” or “New American” style “gins.”

As mentioned in Jim’s review, the nose of Flight 69 is harsh. In my case it was pure alcohol, but both Jim and Harold found that airplane glue scent.

All of us detected a grape-like essence in Flight 69, which in theory should be absent. 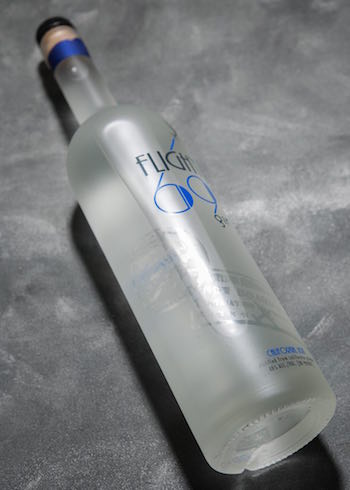 Photo by Jim Trotman: The graphic device, only depicted in frostless relief, depicts and airmail stamp for November 10, 1969 and two boarding passes. They pay good money for this sort of thing and I want them to know I appreciate it.

All traditional gin is distilled from grains such as barley and maize, but any agricultural product can be used as the base in distilling gin. In the case of Flight 69, it was grapes.

As a rule, once distilled into a neutral spirit, that spirt should be tasteless-but in this case the grapes left a residual flavor.

Moving on to the real taste tests–martini style, on the rocks and in gin and tonics we were very impressed with how awesome Flight 69 tasted in all of these forms.

On the palate, in spite of the harsh alcohol scent, Flight 69 is quite smooth.

There is a very distinct vanilla note on the mid-palate, along with  the aforementioned grapes and a heavy floral note–lavender once again, which appears to be the flavor-of-choice among many American distilleries seeking to distance themselves from the traditional juniper-led gins.

In that context, Flight 69 succeeds without question.

It does indeed produce a “lovely” cocktail that is simultaneously light (even breezy) and refreshing.

The botanicals are able to assert their presence even when combined with a mass-produced quinine heavy tonic water,

However, the juniper is barely detectible and I suspect, only by those looking for it (and contemplating carefully what they are tasting) or imbibers possessed of a long association with gin and it’s juniper presence.

If you’re a gin drinker and order one up in a bar, you’ll probably be tempted to ask the bartender something like “Hey, I thought I ordered a gin martini, not a bouquet of flowers! What is this stuff?”

If you unlucky enough to have a new breed, “well-educated” bartender (now called mixologists to differentiate themselves from the “pedestrian” men and women who work in places with names like “Joe’s Tavern” or “The Thirsty Clam”) you’ll be regaled with t vague and undefinable terms like “American” or “Western” style gins and how groundbreaking they are.

Go back to the Thirsty Clam….you’ll get better gin drinks.

So, if you hate gin and want to continue hating gin, yet still have a burning desire to call yourself a gin-drinker, especially if you’ve succumbed to drinking so-called vodka martinis–by all means find a bottle of Flight 69 and join the New American Gin Club (TM).

You can then convince yourself that you have graduated to the level of a real martini drinker, and most of the New Wave drink magazines and judging panels will back you up in your claim.

For the rest of you who still love gin–take a pass.

There are plenty of other boutique gins out there being made in America, Canada and the British Isles that still keep juniper where it belongs-up front and leading the charge.

Harold Gracey is back and here’s his take:

Flight 69 is one of “those gins” that isn’t a traditional gin.

It has subtle yet evident grape, almost like vermouth, and when served neat has a strong odor of alcohol or other ester like scents (airplane glue).

Over ice it is very smooth, and would probably almost disappear into a gin & tonic, making it another possibility for G&T drinkers who don’t like the taste of a traditional London Dry Gin.

Then there is their closing line on the bottle label..”…where will I have my next 69?”, maybe one of the riskier conversation starters imaginable.