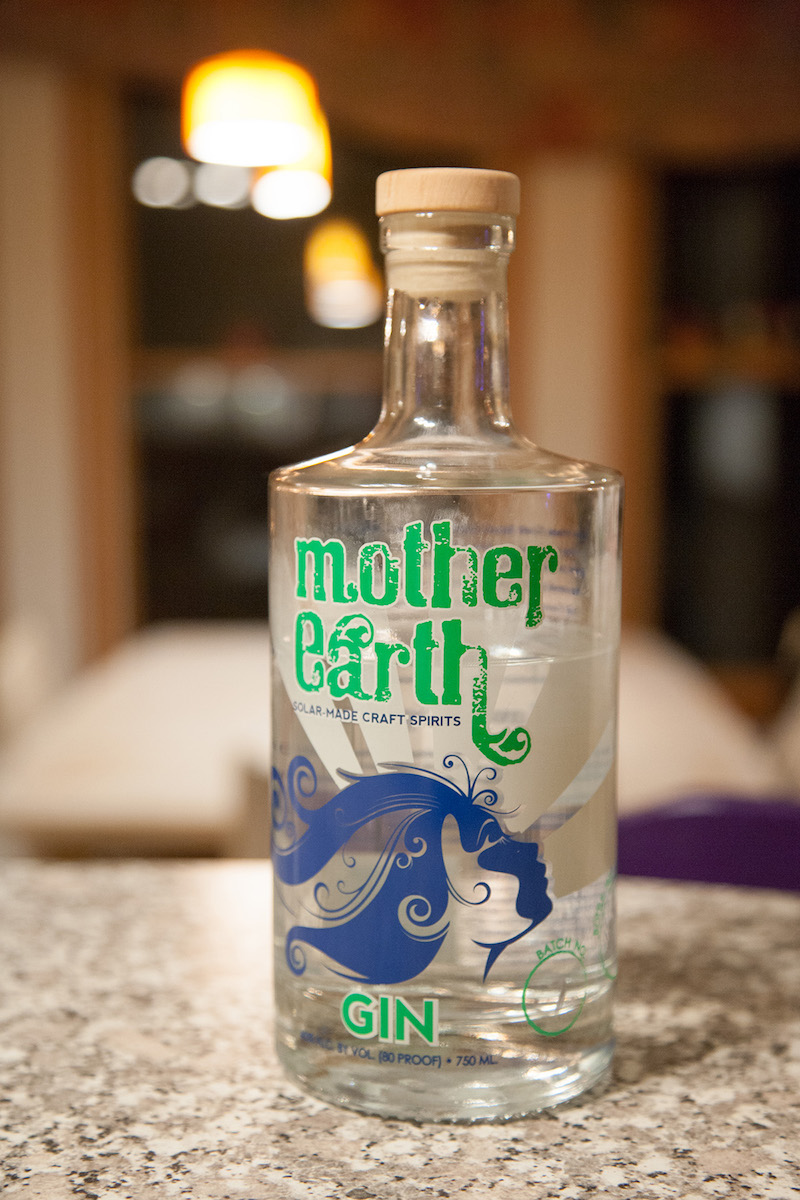 I don’t want to come off sounding dismissive. This gin is not to my tastes but I can see where it would appeal to many people who enjoy gin-based cocktails and mixed drinks.

This North Carolina craft gin carries a punch with cardamom and coriander up front. The mix is peppery too, bringing to mind those jars of pink peppercorns you see in boutique cookery shops.

My reaction, and it is solely my own is, where is the juniper? I know it is in there, it says so on the website. But my tongue can’t sift it out with the heavy, resinous tang of the cardamom and coriander. This happens when taken neat and when shaken with ice.

The next note is anise followed by citrus peel, but that wallop from the C & C still lingers. Not like a searing of the sinuses or anything, more like a slight perceived constriction at the top of the throat. In the video we shot of this, I’m seen with a slight grimace as I point to my throat. Not quite Zapruder-like, but still.   Maybe you shouldn’t read this while eating or having just read a crime caper like The Boston Strangler.

Now, a gin with such a strong profile should thusly retain some character with further mixing, which can be a worthy goal and a beautiful thing. It’s just not my thing.

Also, I am not anti-American gin. We have positively reviewed several. The ones we prefer all explored the space creatively but still kept their gin bona fides, namely, juniper.

I would like to say, Kudos to Mother Earth Spirits for embracing alternative energy through its use of a solar array to power things. Other green initiatives are their use of 100% recycled Blue Jean insulation throughout their building, soy based spray foam insulation the protect their second story ceiling, and eco carpet partially made from renewable resources. The good folks there have created a model for where industry should be moving. This and more can be found on their website at http://www.motherearthspirits.com/solar-made-craft-spirits/Still,

Still I will not be seeking this one out. It would be ages before our local A.B.C. outfit would allow it here, anyway. But I would not discount others from reviewing most positively.   You just won’t find those “others” among the lads you read from here.

Photo Notes… Cool, trippy retro psychedelic themed graphic of a lovely flower child sending kisses to the sun, maybe? The head of the synthetic cork also bears our lovely maiden’s profile in an intricate relief as if by a teeny tiny wood-burning kit. You know, like the ones your cool uncle bought for you and your patents had to take from you because the whole den looks like the Marlboro Man had come to visit and left smoldering cigs on every horizontal surface. 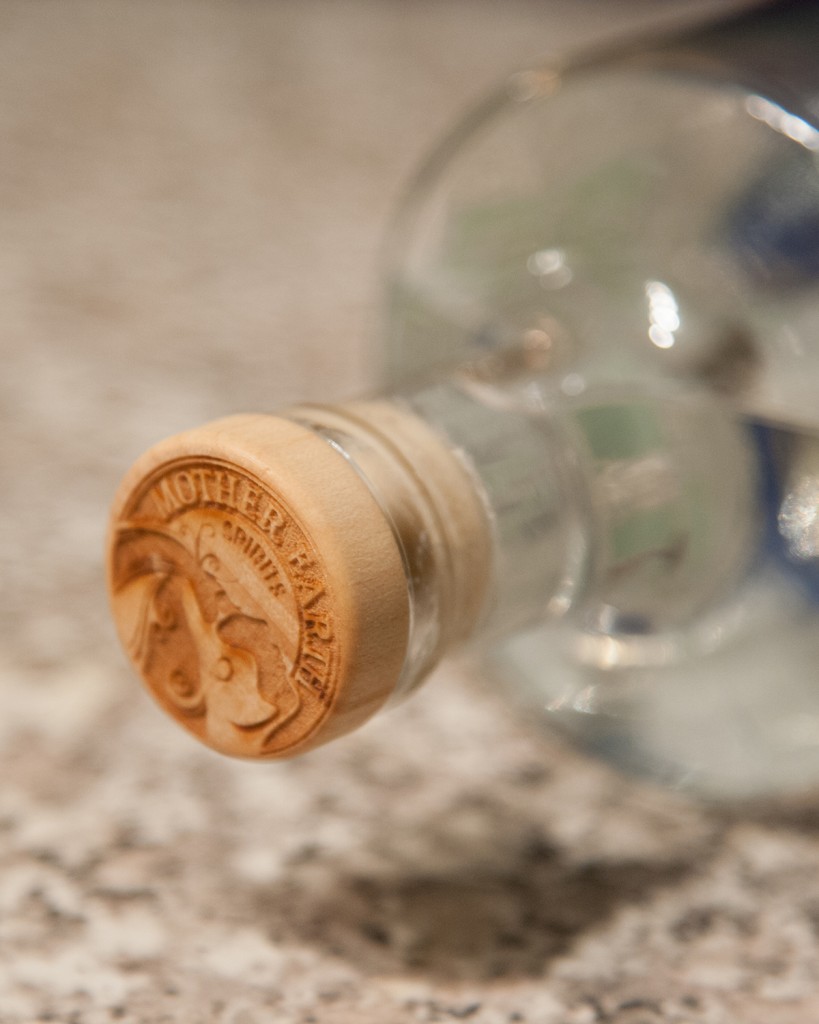 Kinston, NC has always been a small town, but in it’s day, one could say it thrived.

It was home to numerous industries supplying textiles, finished clothing, automotive parts, even chemicals to the rest of nation while also serving as the primary town where surrounding farmers shopped and found farm-related services.

The decline was capped by the loss of their minor league baseball team in 2010, the Indians, an affiliate of the Cleveland Indians moved to Zebulon–a town Kinston at one time dwarfed.

But even before Minor League Baseball added insult to injury, local and transplanted residents saw potential in Kinston and twinned their future with Kinston’s.

In 2006, before the baseball team left town, chef Vivian Howard and  her husband, Benjamin Knight opened a restaurant called Chef & The Farmer.

As the name implies, the menu is composed of ‘farm to fork’ offerings from the surrounding areas.

When I visited Kinston in May, 2016 reservations were full five days out.

To provide some solace to disappointed visitors, impelled to travel to Kinston due the popularity of the restaurant owners on regular public broadcasting programs in NC, they opened a second venue–the Boiler Room Oyster Bar.

In 2008, Mother Earth Brewing opened in the small town, where the population is less than 30,000 and, to put it mildly, hit a home run. Apparently, a baseball team is nit required for extra base hits!

Mother Earth produces some of the best beers I have ever tasted and more and more bars and restaurants are serving their offerings all over eastern North Carolina.

Another notch in Kinston’s belt.

And then they decided to produce spirits.

Which begs the question–were my comments above necessary?

Answer: Yep. Gin Gents has over 100 different gins in our collective possession and there is no way we can visit more than 1% of them.

But Mother Earth is less than three hours away and a Shrine parade placed me there a few weeks ago.

So why not add a bit of personality about the gins we drink when we can?

So let’s get to the gin.

If Gin Gents is to be successful and useful, one of the primary issues we will need to come to terms with is the emergence of non-traditional botanicals to gin.

Al three of us prefer the London Dry juniper forward style of gin; especially Harold and Jim since they tend to drink their gin martini style or on-the-rocks.

I’m more apt to drink gin & tonics and even use other mixers and combinations.

All three of disdain gins that are so juniper laden they literally taste like a pine tree. And many of the bottom shelf gins pricing under $10 taste like jet fuel mixed with pine tree.

So for us, the nuances were how other botanicals–orange zest, cardamom, coriander, anise and other traditional ingredients played a supporting actor role and that is what separated Boodles from Bombay from Tanqueray from Booth’s.

But the new gin which go by classifications such as New American, New West, American Dry and others have gone leaps and bounds beyond juniper and the other half-dozen regular players. 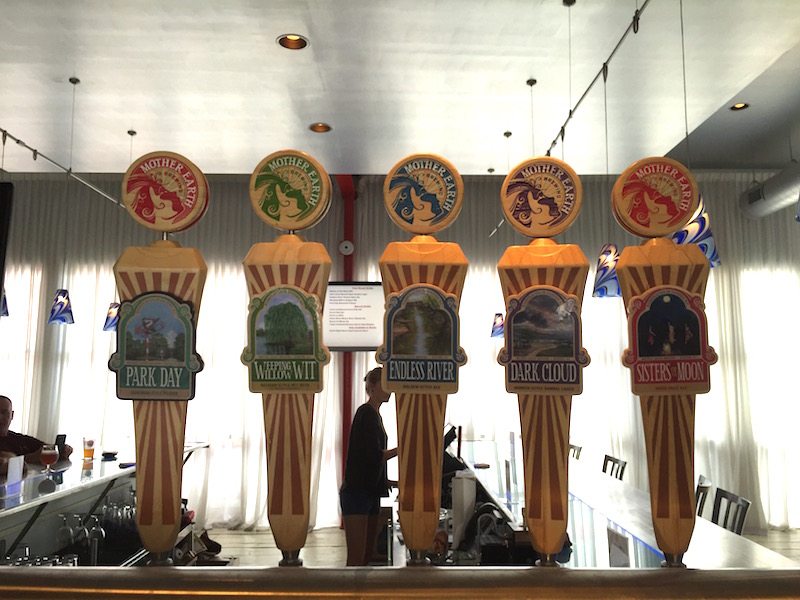 You can on;y sample a small portion of gin, but the adjoining bar serves us Mother Earth’s awesome brews in a funky and enjoyable bar adjoining the brewery and distillery. (Russ Lay)

They aren’t really vodka, but old-timers struggle with whether they are gin.

But there is also some new ingredients; peppercorns and grains of paradise.

On our first attempt, on the rocks–juniper was not really detectable. And to our collective liking.

But later, after the Gin Gents test, I tried it with some quality tonics–“Q” and “Fever Tree.”

And I found I liked it.

These ‘yuppie’ tonics are pricey, but they lack the industrial strength quinine taste of mass-produced Canada Dry and Seagrams.

And, in the case of Mother Earth the juniper was coaxed out, but so was the earthy angelica and the grains of paradise added some pepper and a tiny bit of floral. Finally, the peppercorns seemed to add a little bite on the rocks, while in a G&T it added some cool pepper notes rather than a black pepper hit to the solar plexus.

In short, I found it to be a very, very good gin for summertime gin and tonics–refreshing, smooth, and while not juniper forward, it’s far from a flavored vodka. it’s a real gin and if you honor it with the proper mixers, it’s worth the effort.

I have seen it distributed widely in ABC stores in North Carolina and it is on the shelf at several Outer Banks bars.

When we tasted this gin, I was at first not swept away by it. I thought it had an oaky or grain heavy flavor.

Although I liked it, it wasn’t exactly what I crave in a gin.

However, at the end of the evening, I was “gifted” the remainder by Russ, and brought it home.

At my house in my liquor cabinet, its NC roots took hold and as I had it over the next several weeks in an occasional evening drink, I came to really like it.

I’m not sure how to describe it, but it has definite “earthy” undertones that must come from the wide variety of botanicals that the folks who distill it use. It also fits their legacy and their name. The gin is solar distilled and they list nine botanicals on the bottle, which is also an homage to their connection to the land.

Would I buy it and drink it regularly as my go-to gin? Probably not, but I did like it in my Friday night treat, and maybe that what its intended to be since they are a small batch, craft distillery.

Three out of five Winston’s here!