Method: Shaken with ice (Jim), Straight up in shot glass and as a gin and tonic with lime (Russ)

Availability-Was available throughout South Carolina and the site has on-line ordering for customers where state law allows spirits to be shipped into your state.

A recent check of the website did not list White Tiger as one the currently available products. 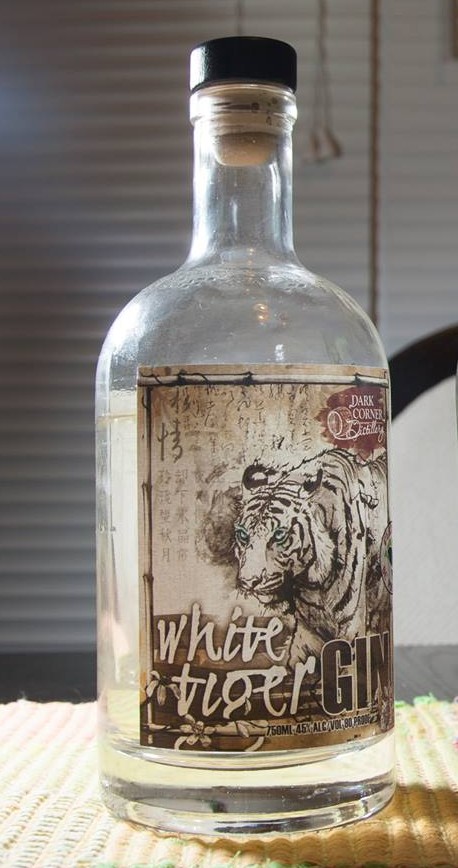 I first came across this gin in a Myrtle Beach, S.C. liquor store, featured in the “Made in S.C.” section.

I was at a Shriner’s convention, an event perfectly suited to the exploration of libation.

When I brought it home, a colleague of mine who hails from the Palmetto State mentioned he had just visited the maker, Dark Corner Distillery, in Greenville.

He was pretty high on their whiskey, but stated they also sold a gin, which he didn’t sample, but was told by the staff would be “different.”

According to their web site, White Tiger’s botanicals include lemongrass, Thai basil, jasmine, and Szechuan pepper, none of which are traditional gin ingredients.

And let’s be clear—whether it’s London-style, where juniper must predominate, or “New Western/New American” (the terms are used interchangeably these days), where other botanicals play a greater role on the palate, juniper is still supposed to be the flavor and nose that takes center stage.

With all of this pre-knowledge I twisted off the cap and poured a shot class.

I could hardly wait to taste hints of basil and Chinese pepper.

Right off the bat the predominant aroma was—whiskey.

I took a slow sip, allowing it to play on my tongue , pondered some and yep—whiskey again.

I decided it might need my favorite gin mixer, tonic water, to bring out the juniper and those exotic Far Eastern flavors.

A few minutes later I sat down on the couch, took a long sip, and was taken by surprise.

I was drinking a gin that was entirely new and as complex as the web site had promised.

Indeed, I decided to give this concoction it’s own name: “Whiskey and tonic”

I then read reviews on other web sites where the reviewers tasting notes revealed juniper, pepper and the heat factor.

Not a single mention of whiskey.

Thinking two of my five primary senses had failed, I gave White Tiger yet another try.

A few days later, I poured one more gin and tonic for my wife.

Before the flavors could dissipate from her palate, she blurted out, “This isn’t gin, it’s whiskey.”

I pointed to the label and told her, sternly, if the label says its gin, it must be gin.

I then took her to the Dark Corner Distillery website, where she could clearly see it was called “gin” on the internet, and as we all know, if the internet says something is true, it must be.

We left the bottle, never touched again, on the bar shelf for about three months, until my GinGents partner, Jim Trotman came by the house.

Without saying a word about my experiences, Jim opened the bottle and his thoughts follow….

I went into this one without any prior knowledge of the gin or its distiller whatsoever. The impact on my taste buds was intense. So I set about to educate myself and like any good scholar I turned to the nearest internet.

The following is the flower of my self-illumination.

The tale begins with Celtic immigrants (those whiskey, and or whisky loving ancestors of some of us) trickling down amongst the Appalachians and setting up camp.

Among them were talented distillers who soon found corn made as decent a starting mash as anything and before the long, the exhaust of the sill fires made the Smoky Mountains even smokier.

The stills moved farther up the “holler” away from the lower lands and into areas harder to access. One of these places is known as Dark Corner, in the Northwestern corner of South Carolina.

These less than legal distillers had to get their hooch to market, and so they found it necessary to tinker with the family Ford a little bit.

At least enough to enlarge cargo space and fast enough to out run Johnny Law. As it turns out driving fast was a lot of fun and so informal races began to be held. Then before you know it, NASCAR was invented.

Back to our story.

Dark Corner Distillery is located in Greenville, South Carolina, smack in the middle of Dark Corner. Their motto is “Home of the World’s Best Moonshine,” and by rights I should be tasting what they are set up to make and that is whiskey.

They have won many awards for their sizable stable of small batch whiskeys with fun names like, Cock Lightening, Hot Mama and Stumphouse.

So after creating all kinds “moonshine,” Dark Corner turned their attentions to gin.

Not only that but they tout White Tiger as a “New Western” variety of gin, one using notes of the Far East, Szechuan pepper, lemongrass, Thai basil.

So New Western takes its cue from the Far East? Okay. Still, I didn’t get any of that other than a peppery heat.

I like hot spicy stuff in general, but this was pretty harsh.

And still, the main flavor component I made out was that of moonshine. If I had known they were supposed to be there, I’d have looked for that basil, lemongrass and whatnot. Missed it.

I happen to really like South Carolina. No clear liquid can change that. Maybe I just don’t have the gene that makes me want to taste whiskey in everything.

My conclusion is that this is the perfect gin for someone.

Then again, that person could just really be super attuned to the tastes of lemongrass, Szechuan pepper and Thai basil and perchance decided it would be a good idea to drink those flavors instead of munch them.

But my ‘buds just can’t seem to detect them mixed into whis- uh, gin.

There may be many in this world for whom White Tiger Ginis just what they are looking for. I am just not one of them.

Well, at least we have NASCAR.