This gin reminds me of one of my favorite Talking Heads songs “Nothing But Flowers.”

Uncle Val’s Botanical Gin borrows from both the so-called “American Gin Democracy” movement, (where traditional gin botanicals take a back seat, especially where juniper is concerned) while also sneaking up behind the Scottish made Hendricks by adding cucumbers to the mix.

But the overwhelming notes in this aptly named botanical gin are flowers.   Think an entire field of flowers, where lavender and chrysanthemums spark your olfactory senses.
Or think of a newly plugged in Fabreeze floral air freshener.
According to the legend outlined on the 35 Maple Street web site, Uncle Val’s Botanical gin was inspired by Zio Valerio’s love of gardening and his native Tuscan cuisine.

Zio, aka Uncle Val was kin to August Sebastiani and hailed from Lucca, Italy.

Sebastiani is well known for his eponymous Sonoma wines and Uncle Val’s is part of a spirits based subsidiary of the family empire.

Open the bottle, pour a shot and hold it a few inches from your nose.

There is the usual alcohol heat, but one that is more subdued than found is less expensive gins.
Move it a little further away and you’re likely to detect lime notes—notes very similar to lime-scented after shave used in old school barber shops as an alternative to the Bay Rum scent.  Mixed in, and most overpowering is an unmistakable floral explosion, embraced by citrus notes.

Our little tasting group picked violets, chrysanthemums, and lavender; the latter being one of the star botanicals.

Take a hit from the shot glass in its natural, warm state and you might say to yourself, “If cologne tasted as good as it smells, this is what cologne should taste like!”

I skipped the cold martini option, leaving that for Jim.

But as a gin and tonic, Uncle Val’s has a lot to offer if one is not a gin purist.

It’s still flowery and citrusy, but unlike other American-style gins we’ve reviewed, the requisite juniper is present (although very subdued) as are hints of cucumber, although not at the levels present in the groundbreaking Hendrick’s brand.

As a G&T, Uncle Val’s is one super-smooth tasting drink, so much so that it would be very easy to over-indulge, in which case one might actually think they are drinking cologne.

Most liquor stores list Uncle Val’s Botanical gin in the $28 to $40 range, although I’ve seen it as high as $50 in Virginia ABC stores.

And make sure you don’t confuse this gin with “Uncle Val’s Restorative” gin, which uses different botanicals but comes in the same shape/color bottle with a similar label.

Because of the overt flowery essence on the nose and palate, many gin drinkers will reject this out-of-hand.
But if I were looking for smooth gin and tonic with a lighter touch—say as a poolside drink on a humid, Southern summer day, I might actually opt for Uncle Val’s as a respite from the juniper forward gins.

It imparts a cool, refreshing vibe and there’s a place for that in the world of gin for someone who wants something more complex than flavored vodkas.

I’d also highly recommend it to any of your gin-hating friends who desribe the spirit with descriptions such as “jet fuel”, “pine tree” or “turpentine.”

Uncle Val’s may just be the bridge to gin they require. 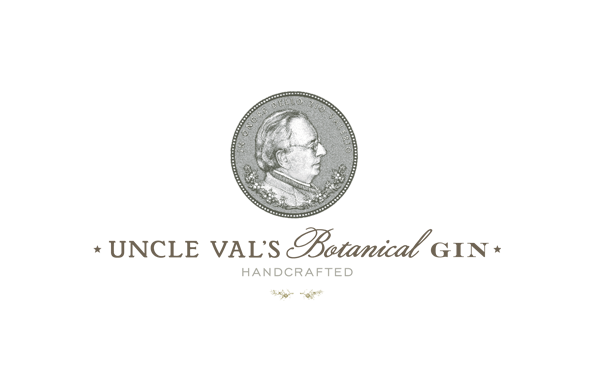 Imagine if you will, a greenhouse. A greenhouse overgrown, verdant, saturated with herbal and floral fumes. Now imagine a party in that greenhouse with middle-aged guys with gold medallions dancing away with mini-skirted pretty young things circa 1978. Now imagine that party located between your tongue and the roof of your mouth. You are either into that sort of thing or not. I am not here to judge.

I really wanted to like this gin because the bottle and its labels are interesting. It features a sort of coin face cameo of said Uncle Val (I suppose) and the bright red lettering “Botanical” gives fair warning there are floral fragrances in your future. In fact, the bottle and label are among the most elegant I’ve come across.

On close inspection, the faint filigree in the corners are in fact botanical illustrations with even harder to read binomial names of the essences contained within. It took my reading glasses plus a magnifying glass but I was able to make them out: cucumis sativus, citrus limon, and salvia officinallis. What the… salvia? I had to Google that one. Actually these denote the flavorings of cucumber, lemon and sage respectively. Miley must have gotten her hands on a different salvia. One also finds the word, “Eureka” tucked in there, as if old Uncle Val had finally conjured together the perfect mix.

On a banner diagonally placed near the bottom and across a corner, the batch and bottle number are right there for you to note. This banner also contains a bit of Uncle Val’s wit and wisdom. From the sample images I have seen online, these seem to rotate among a handful of sayings attributed to the man. The one on our bottle reads: “To quick questions give a slow answer –Uncle Val” and “Uncle Val had no patience for those with no patience.

He liked to take his time and make sure things turned out right, which not so coincidentally is the same technique we employed with this gin. Batch No. 21 Bottle No. 11,311”

I spent some slow moments just sniffing this gin at my final tasting. Some of these get a second or third go as Russ doesn’t have room for half empty bottles. The most pronounced element to me was of lemon zest, not in itself a bad thing. However lurking and then advancing forward was a sage-like floral bouquet. Not quite like taking a whiff from a bottle of perfume, but close.

I had a wonderful Aunt Irene, who I loved dearly and spent some bit of time with her growing up. I still remember and really enjoyed the scent of her purse: a heady mix of Juicy Fruit gum and perfume. I like gins, but am leery of ones that put me mentally in the state of poking around in Aunt Irene’s purse.

I took a sip from a shot glass, room temperature, at that time hovering right about 72 degrees Fahrenheit. Wham! I sensed raw heat and a pop of lemon and lavender that seemed to just hang. Not that I would serve or drink any spirit that way, but it is something we serious gin reviewers must do. Russ says so, anyway.

Then I chilled some in a shaker with ice. Same effect but now the greenhouse bit was heavier and colder.

Now, this is not to shame the craftsmen who built this libation as I respect anyone that takes as much time as they claim to have taken to perfect this gin; all that pumice filtering, five distillations and whatnot. Effort goes a long way with me. But this gin was crying out for something to add to it to turn it around and head it in the right direction.

I added a trickle of dry vermouth, more than I usually use for a martini. The dryness buffeted the sweet citrus a tad, the cucumber note was faint yet there, but still that perfume-like pall clung to the roof of my mouth. I could not detect even the slightest hint of juniper.

Tonic had to be the tonic for this. Surely quinine would deliver me from my quarrel. Hansen’s Tonic and a measure of Uncle Val’s went into a highball glass with ice from purified water. The tonic helped. Quite a bit actually, but still that heavy alcoholic bite and the sage and lavender just would not stop. I found this less smooth than Russ did and had to got eat some garlic bread to lose the aftertaste.

I am working hard to keeping my mind open to American-style gins, and I encourage experimentation with spirit flavoring, but this sort of thing can get out of hand. If we get too far away from juniper, then we are just dealing with another flavored vodka, and the world has more than enough of those. Still, at a recent party, Russ and I did find one soul, a colleague, who was quite taken by Uncle Val’s. Perhaps this is the gin for one out of three people. That’s still a sizable market.