Price: All over the board–$25 to $38. Available online where legal.

So, what happens when you take a nice, sturdy and elegant gin and then boost its alcohol percentage up a good 16%?

Firewater, that’s what you get.

And that works out because that’s what they needed.

As the story goes, the Navy required a stronger concoction to be dubbed Navy Strength.

Any sailor, or even a casual cruise goer, will attest that space on board a ship is limited.

Trade cargo would be stashed together as compactly as possible, and then the combustibles, in this case gunpowder and gin, would be stored in close proximity as well.

But amp up that alcohol and the gunpowder, even moistened by Navy Strength Gin, will still burn.

We tried it. There’s a video and everything.

Out of the powder keg and onto the lips this one took some work to try neat.

Yes, I know it was meant to mix, but mercy, that’s a firecracker.

On the rocks, it is still a bear but doable.

It is clear this one is meant to carry its strength through as a mixed beverage.

And it lingers. In the classic Mel Brooks comedy, Blazing Saddles, a fully inebriated Gabby Johnson has only to exhale in the face of a villain and the guy falls over. 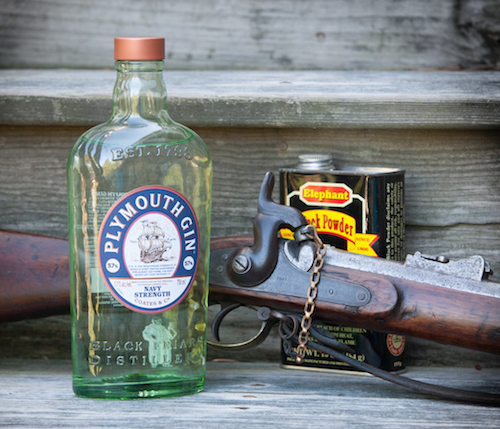 Photo by Jim Trotman. History lesson by Jim Trotman The British Empire was vast and it was brokered with the help of the Enfield P1853 Rifle Musket, an example of which is shown here. These were revolutionary at the time and outfitted the far-flung British military from 1853 to about 1867, when many were converted to breech-loaders using the new fully encased metal cartridges. This particular rifle was made in 1861, exported to the Confederate States and was carried in the American Civil War. If you have one of these beauties and fire it, as I do, you usually have a little black powder on hand. And I did

If you want to try that move at a party, this may be the drink that will do it.

In another sense though, you could think of Plymouth as a person of average height and weight of good character, who turns into the Incredible Hulk at Navy Strength.

Interesting to meet and hang with on an occasional basis. I give both a thumbs up, but in my house, that Navy Strength bottle is going to last a long, long time.

We actually have two videos, one comparing the two gins with some black powder we have laying around the neighborhood in case the British attack us with muskets and we want to even the fight by not using our AR-15’s, and the other of us having our first sip.

My first words were “Ow!!” as it moved from shot glass, past the lips and onto my soon-to-be third degree burned tongue.

Unlike a nice gin buzz, the warmth generated here that spread to my face, ears, and upper chest was more akin to a hot flash. (And yes, since I take Niaspan for cholesterol, even I, as a mere male, know the sensation.)

As Jim noted, on the rocks things didn’t get much better.

I’d say rather than a British gin, it’s more a Brutish Gin…one concocted in the mean streets of Liverpool as opposed to a refined London distillery.

I doubt you’ll find it being served in one of those fancy gentlemen’s social clubs on Fleet Street.

As a gin and tonic things noticeably improved.

Here the gin retains all of its traditional gin elements, but rises above the tonic in such a manner than you have a GIN and tonic rather than a gin and TONIC.

In that context, it rocks, and I would rate it highly.

But you will lose the Plymouth citrus balance in there that makes it slightly different from a London dry.

The alcohol takes control of that situation, and juniper is what you are left with for the most part.

And the ability to set fire to small house plants by exhaling on them.

But don’t forget that alcohol content—it will sneak up on you. Best to avoid at parties and bars if you have a long night planned.

To paraphrase Toby Keith in his song “Weed with Willie” you might find yourself singing:

My party’s all over before it began.

You can pour me some regular Plymouth my friend,

Having said wonderful things about the gentleness and drinkability of Plymouth gin, I need to make clear that the same isn’t true of its more assertive (nasty) brother.

Plymouth Navy Strength has no subtlety about it.

It punches you in the nose before it gets to your mouth and then had all the gentleness of a fiery car wreck.

I’m not sure if it shares any spices or tastes with its brother gin, because after sipping a shot glass of it, I had no sense of taste or smell left.

Nor can I recall reading much on the label, except to be sure I could tell it from the more drinkable version.

Maybe the story about being a black powder rejuvenation elixir is true, or perhaps on small British sailing ships, perhaps getting the most alcohol in the least volume of storage was the issue, but I can assure you they didn’t carry it for its taste!

Rough stuff, the Navy version of Plymouth, even for a guy who thinks Beefeater is smooth!